Bento will take team to ‘next level’

Bento will take team to ‘next level’ 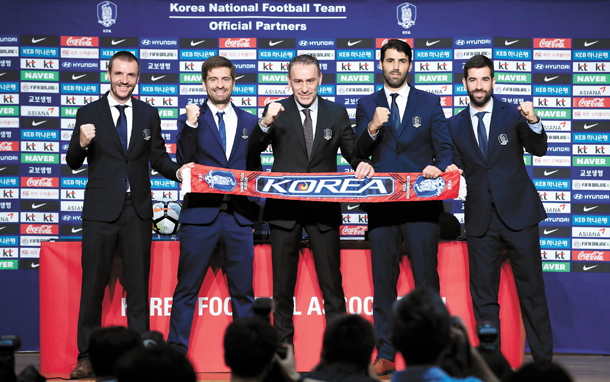 The Korean men’s national football team head coach Paulo Bento, center, and his coaching staff pose for a photo during a press conference at a hotel in Goyang, Gyeonggi, on Wednesday. [YONHAP]

New Korea football coach Paulo Bento said Thursday he is ready to take the national football team to the next level.

Bento was named the head coach of the Korean men’s national football team last week after signing a deal with the Korea Football Association (KFA) that will run through the 2022 FIFA World Cup in Qatar.

“I will try to achieve an ambitious goal with Korea, which is to win the Asian Cup and qualify for the 2022 FIFA World Cup,” Bento said. “It’s going to be a long project, but I’ll also use this opportunity to take Korean football to the next level.”

Bento will make his Korea coaching debut next month when the Taeguk Warriors host Costa Rica on Sept. 7 at Goyang Stadium and Chile on Sept. 11 at Suwon World Cup Stadium.

“We have so many talented young players, so we should give them an opportunity,” he said. “We’ll have two friendly matches next month, and it’s my opportunity to check the players.”

Bento will announce his squad for the upcoming friendlies Monday. He said those who competed at the 2018 FIFA World Cup will mostly make the team, but there will be new faces.

“There are players who competed in the qualifying rounds for the World Cup but didn’t go to Russia,” he said. “I’ll finalize the roster once I review all the players.”

Bento specifically mentioned veteran midfielder Ki Sung-yueng and Koo Ja-cheol during his press conference. Both players hinted at retiring from international duty after the World Cup.

“Ki will be selected for the upcoming friendlies,” he said. “He is not only the team captain but has an important role making plays on the pitch.”

But for Koo, Bento said he hinted at calling up the Augsburg midfielder next time.

“We noticed that Koo is not fit yet,” he said. “We talked on the phone, and he’ll get an opportunity in the future.”

With his staff, Bento watched a K League 1 match between FC Seoul and Pohang Steelers on Wednesday. When asked about his impression of the Korean pro football league, Bento said: “The K League has somewhat less intensity and aggressive football than what I saw from the national team matches. I want to make others think that the K League is also supporting the national team.”

Bento, who previously led teams like the Portugal national team and Sporting, asked for fan support for the national team.

“The national team needs help at the moment, but excessive criticism will not help,” he said. “I hope many fans can support us.”