After first music show win, DIA is ready for more

After first music show win, DIA is ready for more 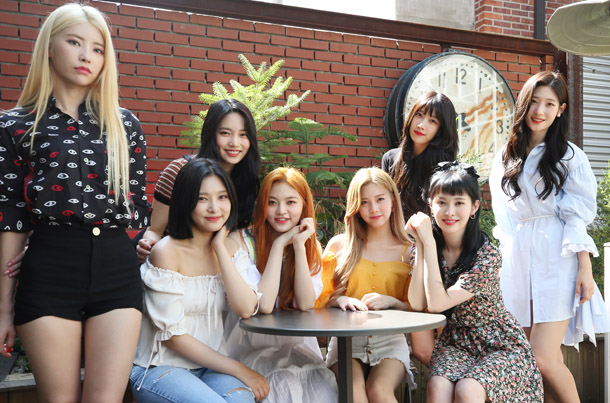 The eight members of DIA during an interview held on Wednesday. [YONHAP]

Last week, DIA’s song “Woo Woo,” the main track of the latest EP, was named the most popular performance on “The Show,” a weekly music-ranking TV program produced by the SBS MTV channel. It was the first time the group has come up No. 1 since their debut in September 2015.

“The first music show earning since our debut three years ago will be a turning point for us. This, I believe, will pave our path for more victories,” member Jueun said in an interview with Yonhap News Agency on Wednesday.

DIA members burst into tears as the winner was announced and it was broadcast live, evoking the vicissitudes the young members had to undergo over the three years.

As a relatively inexperienced girl band, it underwent unusually frequent lineup changes over three years. Initially, DIA had seven members, but two of them, including Eunjin, left the group while three new members joined, reshaping it into an eight-piece act.

As their music releases in the first two years recorded only mild successes, the group went into an 11-month hiatus up until the release this month, an unusually long pause for a young girl band.

The EP “Summer Ade” was released one month after the group’s initial plan to make a comeback in July as the group made last-minute changes to the album.

“It was a big question for us and it will continue to be going forward,” member Huihyeon said, pondering the group’s moderate music-chart performances in the past.

“We thought hard about whether we were on the right track. But with this season, we earned the confidence that we are not on a wrong path,” she said.

The initial success of the new album so far gave a sense of thrill to the members. “I wasn’t tired at all by the busy schedules and the sleep deprivation since our comeback. I was very amused,” Huihyeon noted.

With the positive first step, DIA now aims to climb to the top of local music charts.

“Powered by our recent winning of the show, we hope to conquer other [more mainstream] TV music shows and climb the music charts,” member Jueun said.

Member Chaeyeon said, “I hope we can also go abroad to have meetings with our overseas fans. I was envious of other [girl bands] traveling abroad.”

Jueun squarely denied a recent rumor that she has been dating Yook Sung-jae, a member of K-pop boy band BtoB.

“I was baffled by the news, which I heard in the middle of my public appearance ... I am not in a relationship with him,” she said.

The DIA members also expressed their gratitude for their supportive fans. “In our 10-month hiatus, we did nothing, but you guys have guarded us. We owe our recent victory to you and you guys are always our top priority.” Yonhap