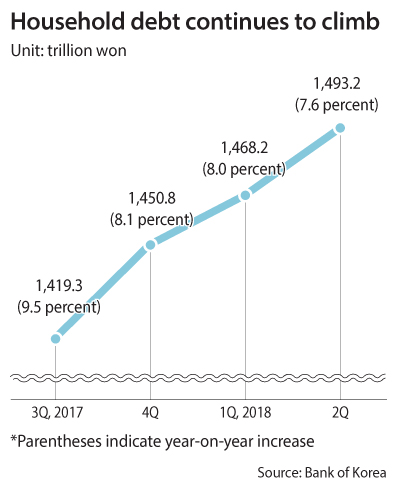 Household debt in Korea grew to nearly 1,500 trillion won ($1.337 trillion) in the second quarter, slowing down in pace but still showing a steady increase.

According to preliminary data released by the Bank of Korea on Thursday, the total amount of outstanding household debt in Korea - a combination of borrowings from financial institutions as well as credit card spending - was 1,493.2 trillion won as of the second quarter this year, up 24.9 trillion won, or 1.5 percent, compared to the previous quarter.

Loans issued by commercial banks rose 12.8 trillion won compared to the first three months of the year - nearly half of which was in the form of mortgages. Korean households also spent about 2.2 trillion won with their credit cards from April to June.

“More apartments became available in the second quarter which expanded the number of mortgages and other housing loans,” said an official from the central bank. “Credit card spending also went up due to seasonal factors such as the increased number of holidays in May and the World Cup in June.”

But the data shows that the pace of the increase has notably slowed compared to a year ago.

In the second quarter last year, household debt rose 10.4 percent year on year. This time around it has climbed by 7.6 percent, the slowest rate of growth since the first quarter of 2015 when the year-on-year growth rate stood at 7.4 percent.

The slowing pace of increase even surpassed government forecasts - the government’s target for the pace of growth in outstanding debt is 8.2 percent.

The speed of growth has dropped since last year when the government began churning out measures to cool down the housing market.

The Moon Jae-in administration considers the rapid growth in the amount of outstanding debt to be a ticking bomb for the country’s economy, especially right now when major economies around the world, including the United States, are raising their benchmark rates, which is pushing up the lending rates of local financial institutions.

In 2015 alone, the amount of outstanding debt went up by 118 trillion won, only to increase by 139 trillion again the next year. Last year it rose by 108 trillion won.

At the current pace, it’s highly unlikely that household debt will increase by more than 100 trillion won this year.

In the first half, the amount borrowed by Korean families rose by 42.3 trillion won.

Still, market analysts explain that regardless of the pace of increase, the continuous growth of household debt will be a major source of burden for the central bank in its decision to push up the benchmark interest rate.

“The threat [to the economy] posed by the quantity and quality, as well as the rate of growth, of household debt is alarming,” said Seo Young-soo, an analyst from Kiwoon Securities, adding that the continuous rise in the amount of debt would make the central bank more reluctant to push up its benchmark rate in the fear of massive defaults on loans.

The central bank froze the benchmark policy rate at 1.50 percent in July.

The Bank of Korea’s next monetary policy committee meeting is slated for Aug. 31. If the Korean central bank decides to freeze the rate again in August, the spread between the Korean base rate and the U.S. base rate would further widen as the U.S. Federal Reserve is expected to hike its interest rate during its September meeting. At the moment, the U.S. Fed’s target rate range is 1.75 to 2.00 percent.