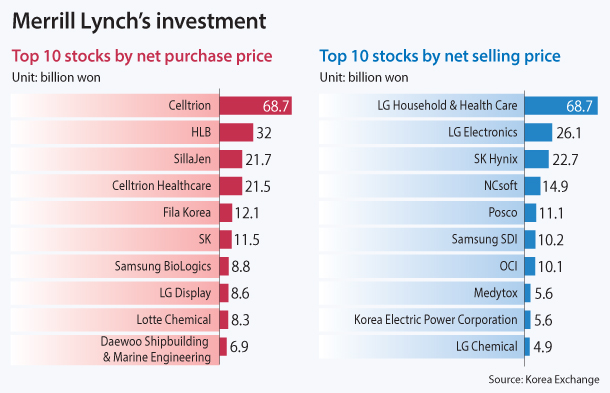 “Avoid the anchovy” has emerged as an unlikely new code of conduct for some Korean retail investors. The anchovy refers to Bank of America Merrill Lynch, as the Korean word for anchovy - myeolchi - sounds a bit like Merrill Lynch.

Korean investors placed the Seoul branch of the multinational investment bank on their watch list due to alleged losses stemming from the bank’s high-frequency trading, which prompted the authorities to strengthen their monitoring of the company.

Korea Exchange, the country’s securities exchange operator, said that it has toughened its scrutiny on the American company.

“We are conducting comprehensive monitoring of trading done by Merrill Lynch,” said Chung Seok-ho, a director at the Korea Exchange.

Some investors - especially those on the junior Kosdaq bourse - were so outraged over the trading practice that they launched a petition on the Blue House website last month to limit Merrill Lynch’s trading activity.

The petition accuses the U.S company of making massive buy orders on certain stocks and then quickly selling them again to take advantage of price differences, which ends up pushing down stock prices.

The retail investors say that the brokerage carried out high-frequency trading last year through early this year and targeted highly-fluctuating stocks, such as biopharmaceutical units on Kosdaq. The massive purchases and sales from Merrill Lynch often had a significant impact on the daily stock prices of Kosdaq-listed companies, since the Kosdaq sees less frequent and smaller deals compared to the main Kospi bourse.

The petitioners say such practices are market distortion.

“Foreign brokerage Merrill Lynch deceives retail investors into buying certain stocks and manipulates stock prices using their advanced algorithmic trading,” a petitioner wrote on the Blue House website. It remains to be seen whether the alleged trading scheme is a violation of the law.

“It is hard to determine whether Merrill Lynch broke the law,” Chung said. “We can make a decision on whether its activity falls into the category of market distortion after the monitoring.”

Korea’s retail investors have raised the need for stronger regulation on short-selling and insider trading following a series of scandals.