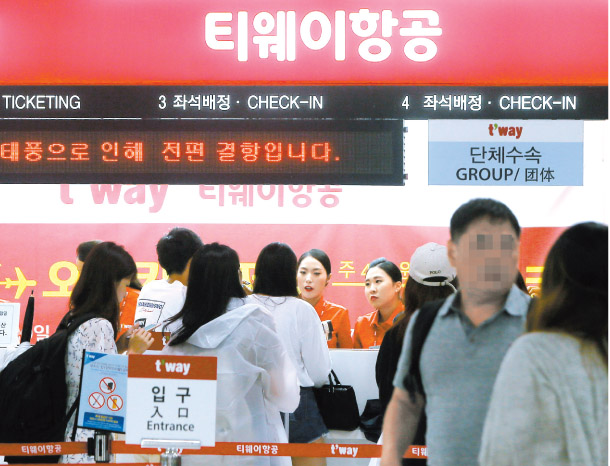 Customers hoping to buy flight tickets crowd Jeju International Airport on Thursday as all flights are canceled due to Typhoon Soulik. [YONHAP]

The Ministry of Land, Infrastructure and Transport said a total of 532 flights operated by seven local airlines, including Korean Air and Asiana Airlines as well as budget carriers like Jeju Air, have been canceled on Thursday.

Flights from or to Jeju have been canceled as the typhoon was near the area. Some other domestic flights, such as those connecting Gimpo and Ulsan, were also affected.

“Though the typhoon is expected to have little impact on international flights, customers may be notified later on further cancellations depending on weather changes,” the Transport Ministry said in a statement. “Customers should check on flight schedules before they head to the airport.”

Airlines have been forming emergency response teams to monitor the weather and answer customer inquiries. Full service carriers Korean Air and Asiana Airlines said in a press release that they are not charging any extra fees from customers canceling tickets or changing their flight schedules for canceled flights. Budget airlines Jeju Air and Jin Air also said they are not charging any fees.

While flight cancellations are expected to be largely reduced from today, a source from the airline industry said flights schedules are still uncertain.

Asiana, as of press time, said it will run six extra flights today - four domestic and two international - to transport passengers that were supposed to leave on Thursday.

Mobile carriers also created emergency task force teams on Thursday to maintain a stable telecommunications service in case of disaster. Korea’s largest mobile carrier SK Telecom said it ran safety checkups on 4,000 base stations in rural and mountainous areas vulnerable to heavy rain. The company also said it prepared 55 mobile base stations and 50 power-generating trucks along Typhoon Soulik’s projected course in case fixed base stations are damaged. The mobile carrier has allocated 2,800 of its staff to a situation room since 3 p.m. Wednesday to monitor telecommunications and respond to emergencies.

LG U+ started operating its 24-hour situation room from Thursday. The carrier also prepared 47 mobile base stations and 600 emergency generators, along with 2,400 of its employees on stand-by for emergency situations.

Operators of high-rise skyscrapers are also on edge. Korea’s tallest building Lotte World Tower, a 123-story building 555 meters tall, went through safety checkups on Tuesday and Wednesday. The lightning rod and wind power generator on the top of the building have been strapped down with metal cables and elevator speeds will be adjusted depending on wind speeds. Lotte’s situation room is monitoring about 500 sensors that track the position of the building.