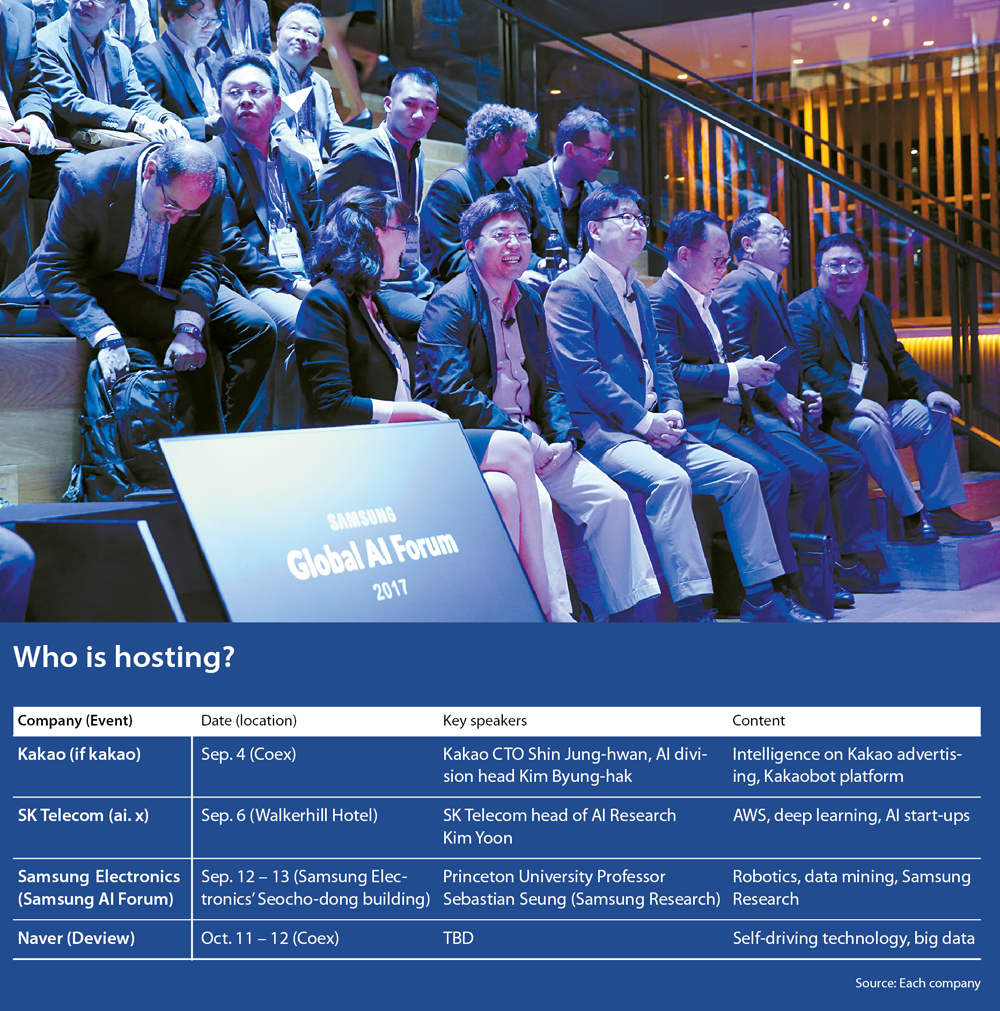 The season of tech conferences has arrived. From next month, Korea’s leading IT conglomerates including Kakao and Samsung Electronics will invite programmers and professors from across the world to discuss the latest issues in artificial intelligence technology.

Kakao kicks off “if (kakao) dev 2018” on Sep. 4 at COEX in Gangnam District, southern Seoul. Topics on the table include the development of Kakao Bank’s mobile app and face recognition technology using deep machine learning.

“We want to introduce Kakao’s successful messenger, taxi and payment services and their related technology,” said a spokesman for the company.

SK Telecom invited IT experts from Amazon, Google and OpenAI to speak at its ai.x 2018 conference, which will be held on Sep. 6 at the Walkerhill Hotel in Gwangjin District, eastern Seoul. Speakers include Bratin Saha, vice president and general manager of Amazon’s Machine Learning Platforms, as well as Jang Byung-tak, professor of computer engineering at Seoul National University.

Samsung Electronics will hold its second Samsung AI Forum from Sep. 12 to 13 at its R&D center in Seocho-dong in Gangnam District, southern Seoul. Speakers for the conference, which will touch on “artificial emotional intelligence” and robotics, include Cynthia Breazeal, a professor of media arts and sciences at the Massachusetts Institute of Technology, and Sebastian Seung, a professor of computer science at Princeton University.

Breazeal is the chief creator of Jibo, a social robot designed to serve as a companion to humans. Prof. Seung, who has a background in neuroscience, is regarded as one of the top academics in the field of artificial intelligence. He was scouted as chief research scientist for Samsung Research, the tech conglomerate’s R&D organization, this June.

Naver, which began hosting a conference for its programmers from 2006, will open its tenth Deview conference to developers across the country at COEX from Oct. 11 to 12. The conference will be a good chance for the company to show its technological achievements and move beyond its reputation of simply being the country’s largest internet portal.

These companies are using conferences to encourage some of Korea’s brightest students to work for them.

Last month, Naver hosted the Naver Platform Colloquium 2018, inviting over 200 undergraduate and graduate students to learn about the company’s newest technology. Kakao’s Code Festival, the last round of which will be held tomorrow, invited university students to program competitively for a chance at interning at the company.