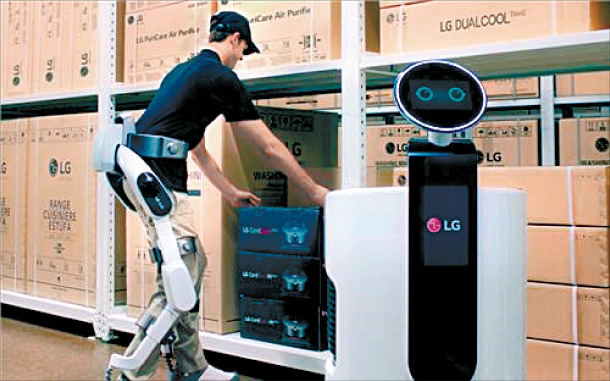 LG Electronics said Thursday it will showcase a wearable robot that can help workers lift and move heavy objects easier at an upcoming tech exhibition in Germany.

The electronics company said the CLOi SuitBot will be unveiled to the public at the Internationale Funkausstellung (IFA) Berlin, which kicks off next week.

LG Electronics said the wearable robot, which strengthens the legs and lower body, will help users enhance their physical strength at construction sites and factories, along with other everyday activities. The device can also assist those with physical impairments.

The company applied artificial intelligence technology to the robot to analyze the surrounding environment and alert users of potential threats.

The CLOi SuitBot also stands out from other wearable robots as it is more comfortable and can be worn easily.

LG said it will continue to expand its research into robotics to help people overcome their physical limitations. Last year, the company bought shares in SG Robotics, a South Korean developer of wearable robots.

LG said its CLOi brand aims to provide users with clever robots that run on what it calls “operating intelligence.”

The company has not yet announced the detailed date for the release of the CLOi SuitBot.

LG said it will continue to develop more robots for household and commercial purposes.