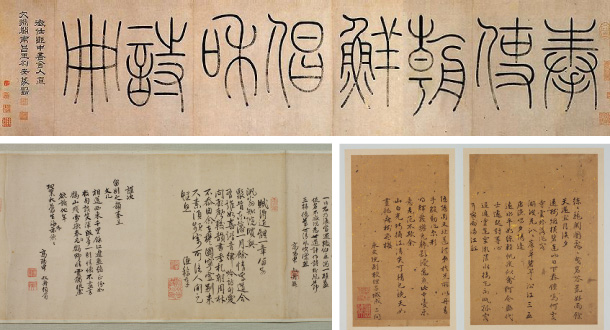 Two cultural artifacts have been designated as national treasures, including a scroll composed of poems shared by envoys in Joseon (1392-1910), top and above left, and an album of poems compiled by Prince Anpyeong (1418-1453), above right. [CULTURAL HERITAGE ADMINISTRATION]

An anthology known as the “Bongsa Joseon Changhwa Sigwon,” or poems shared by envoys in Joseon, and “Bihaedang Sosang Palgyeong Sicheop,” which is an album of poems compiled by Prince Anpyeong (1418-1453) have been designated national treasures, according to the Cultural Heritage Administration (CHA) on Thursday. These books were previously on the country’s Treasure list.

This anthology is composed of 37 poems exchanged between Seong Sam-mun, Sin Suk-ju and Jeong In-ji, who were scholars of Jiphyeonjeon, known as the Hall of Worthies of the Joseon Dynasty (1392-1910), and Ni Qian, an emissary from the Ming Dynasty of China. Ni Qian was a lecturer of the royal literary institute of the Ming Dynasty of China. He came to Joseon bearing a royal message about Emperor Jingtai’s accession to the throne in 1450 and stayed for about a month. During this time, he had exchanged these poems with the three Korean scholars, who were government officials responsible for greeting Chinese emissaries, said the CHA. The anthology also contains the title handwritten by Wang Shuan, who was an official at Wenuanan Hall of the Qing Dynasty of China, as well as epilogues written in 1905 by some of Ni Quan’s descendants.

It was initially made into a book by Ni Qian, but during the Qing Dynasty, it was remade into a scroll that stretches about 16 meters (52 feet). Around 1958, the scroll came to Korea and was appraised by respected art collectors at the time like Kansong Jeon Hyeong-pil (1906-1962). The appraisal record still exists today, elevating its historic value as a cultural heritage, according to CHA.

“We believe it is valuable material containing vivid records of the country’s diplomacy with the Ming Dynasty of China and information about calligraphy in the early Joseon period,” said an official from the administration. The anthology is currently in the possession of the National Museum of Korea. 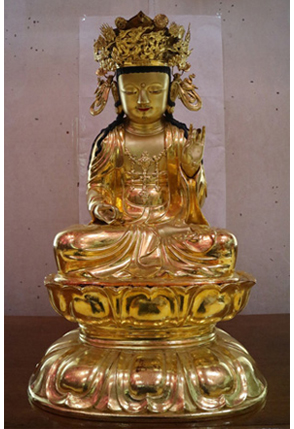 Another newly-designated National Treasure is an album of poems compiled by Prince Anpyeong, who also goes by the pen name Bihaedang. According to the CHA, the album contains the works of 21 Korean poets, two from the Goryeo Dynasty and 19 from the Joseon Dynasty under the theme of “Eight Views of Xiaoxiang.” (The name refers to the beautiful scenery of the Xiaoxiang region in what is now the Hunan Province in China. They are the subject of numerous poems and were depicted in many paintings during the Song Dynasty.)

According to the CHA, since the poems are handwritten by the writers themselves, people can not only enjoy the calligraphy, but also enjoy the high literary standard seen in the poems. The CHA said that most of the writers’ handwritten works had been destroyed, therefore, making this album a valuable asset to Koreans today.

On Tuesday, the CHA also listed two cultural artifacts to the country’s Treasure list. They include a painting of a Birojanabul in Bogyeong Temple in Pohang, North Gyeongsang, which became Treasure No. 1996 and a Pyongyang Castle Painting on a six-panel folding screen, which became Treasure No. 1997. The CHA also said it plans to designate four more artifacts as Treasures, including the Seated Avalokitesvara Bodhisattva statue at Bulam Temple in Namyangju, Gyeonggi; the Seated Wooden Sakyamuni Buddha at Chilbo Temple in Seoul; Notes of Minister Lee Ik-tae (1633-1704); and a pair of gold earrings that dates back to Silla Dynasty (57 B.C.-A.D. 935) that were excavated in Gyeongju, North Gyeongsang, in 1949.