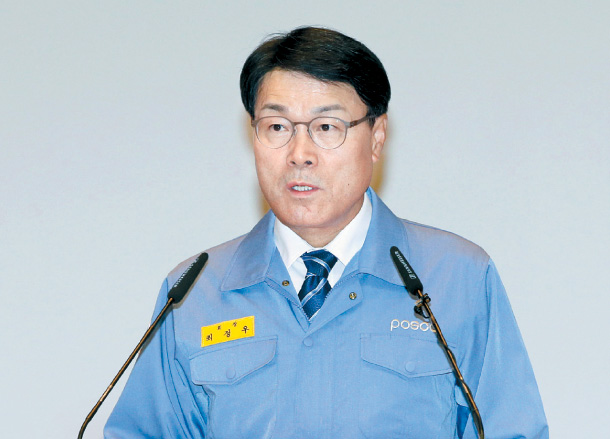 Choi Jeong-woo, the ninth chairman of Posco, suggested that his vision “With Posco” be launched with new values that the present age demands.

“With Posco” is a new vision to create development with stockholders, clients, suppliers, partner companies and the community altogether. Choi said that Posco will create a mature corporate culture by pursuing values of consideration, coexistence and symbiosis and move forward to become a 100-year company.

There are three reform directions to achieve this new vision. The first is “Business with Posco” which creates value with customers, suppliers and partners. The second is “Society with Posco” to build a better society together. The third is “People with Posco” to create a corporate culture of trust and creativity. To uphold these three pillars, Posco will walk along the New Posco Road in solidarity.

Posco is trying to upgrade its corporate social responsibility and social value so that it can pursue its new vision, “Society with Posco.” At the same time, employees can develop themselves for a new era with future generations.

Posco is planning to form an industrial ecosystem by making venture valleys in many local communities, including Pohang, North Gyeongsang, and Gwangyang, South Jeolla. It will push economic activities forward by making a 1 trillion won ($891 million) venture fund. By expanding the benefit-sharing system that shares welfare facilities and outcomes with partners, Posco will actively develop win-win management.

With this, Posco will reform its corporate culture so that it is built on trust and creativity and pursue the goals of “People with Posco.” Posco employees will be prepared with proficient work capabilities and personalities as corporate citizens and have a strong sense of responsibility and passion.

For this, Posco is expecting to begin its Corporate Citizenship Committee, in which management, outside directors and experts will participate to promote ethical and transparent management and carry out socially responsible activities.

Furthermore, Posco will create a human-centered corporate culture through a fair human resources system where employees are appointed based upon their capabilities and performance.

Posco will pursue practicality over formality, action over reporting and real value over obligations to move forward and be a responsible company that lasts for over 100 years.

With this, Posco’s Steel Village project was introduced to 193 UN member nations as an outstanding example of corporate social activity at a high-level political forum on sustainable development hosted by Korea’s Ministry of Foreign Affairs at the UN headquarters.

The Steel Village project, a representation of Posco’s corporate social responsibility, builds houses or bridges using Posco’s steel and construction methods to people living in disadvantaged environments. Through the project, Posco has provided homes, playgrounds and bridges made of steel to 104 families in Vung Tau, Vietnam, since 2014. This year, Posco donated a steel dome to a school in Thailand.

The Steel Village project was registered as a model example on the UN sustainable development goals website last November and at the 51st session of the UN Commission on Population and Development this April.