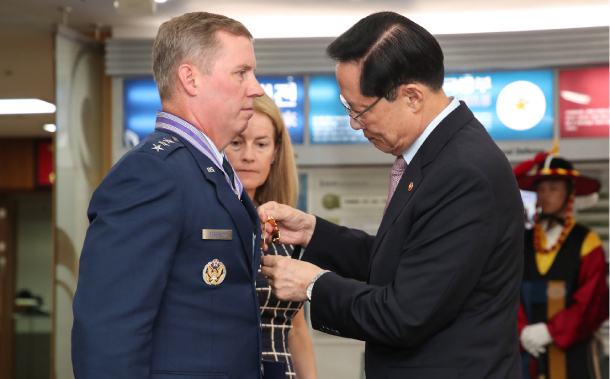 The Korean government on Thursday conferred a medal of merit to Lt. Gen. Thomas W. Bergeson, the outgoing commander of the U.S. 7th Air Force, for his contribution to peace and stability on the peninsula.

Defense Minister Song Young-moo gave Bergeson the Gukseon Medal, the second-highest class in the Order of National Security Merit, on behalf of the Korean government, his office said. Bergeson, who took the commander post in July 2016, is set to leave the position next week.

“[Bergeson] has contributed greatly to safeguarding peace and stability on the Korean Peninsula through a show of strong deterrence capabilities against North Korea’s nuclear and missile threats,” the Defense Ministry said.

“He was recognized for his contribution to establishing the strong combined defense posture by enhancing the combined operations capabilities,” it added.