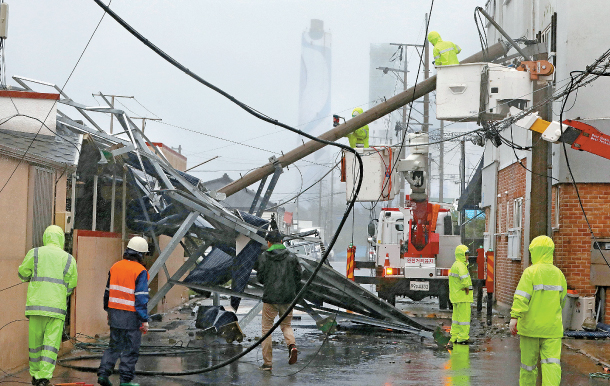 A solar panel swept off the roof of a senior citizens center in Samyang-dong, Jeju City, knocking over a telephone pole as Typhoon Soulik passed Thursday. [NEWS1]

As Typhoon Soulik landed in Korea earlier this morning, the national weather administration warned of extremely strong winds and heavy rains throughout the country.

“The typhoon will bring on Friday strong winds of 30 to 40 meters per second [67 to 89 miles per hour] on land and winds of over 50 meters per second in mountainous areas,” said the Korea Meteorological Administration (KMA). “With this kind of wind, glass windows, street lamps and electricity poles can break. Watch out for your safety.”

This was the first time in six years that a typhoon has landed in Korea. Typhoon alerts were issued in Jeju Island, South Gyeongsang, the Jeolla and Chungcheong regions, and in the cities of Sejong, Gwangju, Busan and Daejeon Thursday afternoon.

The weather agency said it will rain more than 50 millimeters (two inches) per hour in Jeju Island, the southern coastal regions and in Gangwon as the typhoon moves northeast across the peninsula.

The medium-sized typhoon left destruction in its path as it passed near Jeju Island from Wednesday to Thursday. Some 30 trees were uprooted in Jeju City, some 12,000 households lost power across the island - of which some 4,600 had not recovered power as of press time Thursday - and at least one person went missing.

A 23-year-old woman surnamed Park went missing in the sea near Seogwipo Wednesday night. She was allegedly taking a photo by the sea with a 31-year-old man surnamed Lee, when a wave swept over them and she disappeared. Lee reported the incident to the police and authorities have been searching for her. She was not located as of press time Thursday.

Over 550 flights were canceled going in and out of Jeju International Airport from Wednesday to Thursday afternoon.

President Moon Jae-in, in an emergency meeting at the Blue House Thursday, exhorted authorities to put the safety of the people first.

“My heart is heavy in hearing of the damage the typhoon has already caused in Jeju Island,” Moon said. “Central and local governments must do all they can to respond effectively to the typhoon today and tomorrow to minimize the damage to the people.”

“Especially take care to ensure we don’t have accidents, such as tower cranes collapsing, due to strong winds,” Moon said. “And please check on things that may fly off buildings in the wind, like store signs.”

Moon ordered the Ministry of the Interior and Safety to look into declaring any specific areas with severe damages from the typhoon as special disaster zones to provide government compensation for property damages.

He also recommended that schools close or adjust class hours for the safety of their students.

Nearly 1,500 schools in Jeju Island, South Gyeongsang and the Jeolla regions canceled classes today. The Seoul Education Office ordered some 1,900 kindergartens and elementary and middle schools to close today and recommended that 317 high schools in the city not hold classes.

The typhoon was forecast to move northeast toward Chungju, North Chungcheong, around 9 a.m. this morning, then into the sea north of Gangneung, Gangwon, around 3 p.m. today. The typhoon will then continue to travel northeast into the East Sea and weaken tomorrow afternoon in the sea east of Chongjin, North Korea, the KMA said.

“The typhoon’s route is similar to Typhoon Kompasu, which caused some severe damage in 2010,” Moon said. “It is staying on land longer than Kompasu, which, I am afraid, may mean more damages.”

In September 2010, Kompasu passed on the west side of Jeju Island and made landfall near Incheon’s Ganghwa Island, moving north of Seoul and passing into the sea northeast of Gangwon.

This passage took some 20 hours. Kompasu resulted in 18 deaths and injuries and about 1,300 displaced people. Damages at the time totaled some 167 billion won ($149 million).

Typhoon Soulik is moving at a slower pace than Kompasu, according to the KMA.