Who are fools, who are villains?

Who are fools, who are villains?

KIM HAN-BUYL
The author is the head of the digital content lab at the JoongAng Ilbo. 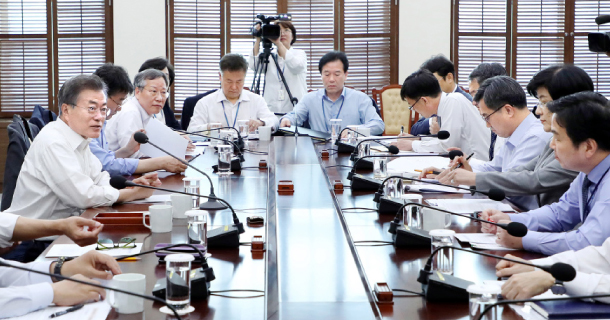 I went to the west coast for summer vacation. I drove around the beaches in South Chungcheong and North Jeolla, and there were a number of tunnels on the way. When I drove through the long, dark tunnel, I could not see what was around me and stared at the bright end. It is what’s called “tunnel vision.” It is similar to the blurred, circular field of vision you have when you are drunk. I felt a strange pressure when my vision narrowed, and I didn’t like driving through the tunnels.

There is psychological tunnel vision, which is focusing on one thing so much that judgment becomes blurred. It’s like looking at the tree and not seeing the forest. Once you realize it, you feel like a fool.

What’s more upsetting is when someone tricks me using the tunnel vision, especially public agencies or so-called experts. They often “play” with numbers and charts. Numbers are powerful. Psychologically, when specific numbers are mentioned, people tend to assume that they are accurate. When combined with a chart that shows the numbers intuitively, the power doubles.

Those who use tunnel vision drastically cut off the x-axis or y-axis from a chart and show a part of it, expanding the distance between gradations, using tricks to make small ones bigger and big ones smaller to show what they want to show, Gerd Bosbach argued in his book, “Lies of Statistics.”

A chart recently released by the Blue House was a similar case. Claiming that the rate of household income was improving, the latest figure of 2.1 percent was drawn bigger than 2.8 percent from the past. Also, on the improved quality of jobs, 0.2 percent margin was marked the same as 0.9 percent margin. Because the errors were criticized, the person in charge explained that the designer drew the chart by hand and made mistakes.

It is pathetic that the national data charts were hand-drawn and mistakes were allowed. German statistician Dieter Hochstetter classified those who manipulate numbers into two: They are either fools who don’t know what they are doing and make errors or villains who use statistics for the interests of certain groups.

To break tunnel vision, you have to keep your eyes wide open and slowly look around. Going around the tunnel is not a solution. You can similarly shake off psychological tunnel vision. Distrusting all statistics and numbers is like burning the house to scare the mouse away. Rather than denying the numbers, you should think about how correctly numbers can be used, advised Bosbach in his book. So let’s keep our eyes open and see who the fools and villains are.