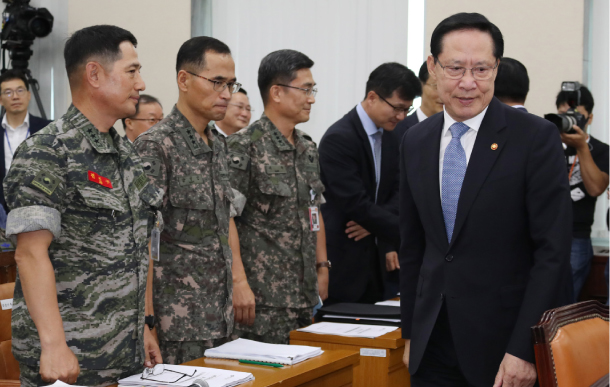 South Korea will propose withdrawing guard posts in certain designated areas of the demilitarized zone to North Korea, rather than reducing the border facilities by an equal amount on both sides.

Defense Minister Song Young-moo made the remarks amid concerns that, should the two Koreas agree to remove the same number of guard posts, Seoul would be at a disadvantage, given that the North has about 160 guard posts in the DMZ, double the number that the South has.

Seoul has been pushing for the pullout on a “trial basis” in line with the April inter-Korean summit agreement to transform the DMZ into a “peace zone.”

“I wore the military uniform for 40 years, long enough to know that we should not look to reduce an equal number of guard posts,” said Song, a retired admiral, during a National Assembly defense committee session.

During their general-grade military talks last month, the two Koreas shared an “understanding” on fostering peace in the DMZ by pulling out guard posts, disarming the Joint Security Area and jointly excavating the remains of fallen soldiers.

At their summit in April, South Korean President Moon Jae-in and North Korean leader Kim Jong-un agreed to “carry out disarmament in a phased manner, as military tension is alleviated and substantial progress is made in military confidence building.”