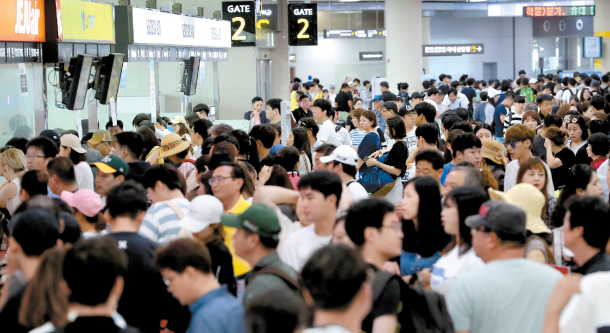 Travelers flock to Jeju International Airport on Friday after Typhoon Soulik exited the Korean Peninsula that day. Hundreds of flights were canceled due to the typhoon since Wednesday, leaving people stranded on the island. [NEWS1]

Local weather authorities said the typhoon appeared to have lost wind speed as it came into contact with cold water in the Yellow Sea off Jeju Island earlier this week. The typhoon lost momentum due to the weak winds and the contraction of high atmospheric pressure in the Northern Pacific away from the Korean Peninsula, according to officials.

Typhoon Soulik landed in Mokpo, South Jeolla, on Thursday night and swept northeastward, passing through the Jeolla region, the Chungcheong region and Gangwon before heading toward the East Sea at about 12 p.m. on Friday.

Reports of damage came mostly from the southern regions. One person was reported missing, two were injured and 46 people had their homes flooded, according to the Central Disaster and Safety Countermeasures Headquarters. About 22,840 houses, buildings and farms in Jeju Island, South Jeolla and Gwangju lost electricity, but power was restored to 98 percent of those places by 6 a.m. Friday.

The typhoon came closest to Seoul at around 9 a.m. Friday after passing Daejeon at 6 a.m. and Boeun County in North Chungcheong at 7 a.m. The capital area experienced strong winds and a small amount of rainfall on Friday morning, but it wasn’t directly affected by Soulik.

Local authorities have yet to find the 23-year-old woman who was swept away by a wave in Seogwipo, Jeju Island, Wednesday evening while taking a photo. The 31-year-old man who was with her at the time of the accident and called 112 after she went missing sustained injuries on his arms and legs, said police.

About 73 people formed into a rescue team to search for her in nearby waters, said Jeju’s marine police.

A steel steeple that was attached to the roof of a six-story church in Saha District, Busan, fell off at around 4:40 a.m. on Friday due to strong wind, prompting police officers to set up safety fences nearby to keep passersby away.

At 5:55 a.m. Friday in Busan’s Nam District, a water tank fell off a roof, landing on a nearby road. A 16-year-old boy was injured in Goheung County, South Jeolla, at 8:40 p.m. on Thursday when a brick wall partially collapsed. Authorities said the boy was currently hospitalized and being treated for bone fractures.

When Typhoon Soulik reached 90 kilometers (56 miles) southwest of Seogwipo, Jeju Island, at 3 a.m. on Thursday, it was moving at a speed of 144 kilometers per hour, pouring 200 millimeters (7.8 inches) of rain throughout the island. By Thursday afternoon, the typhoon had withered down to 4 to 8 kilometers per hour as it approached mainland Korea.