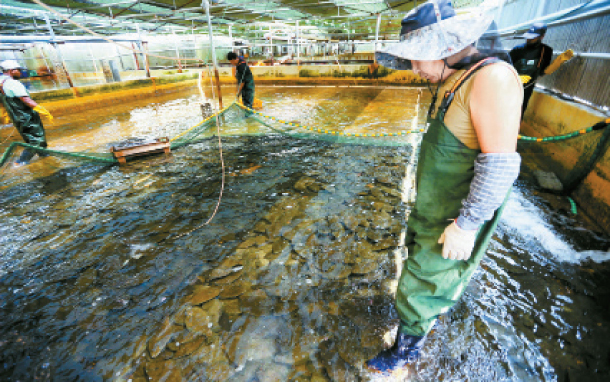 A farmer checks on his fish farm in Gijang County, Busan, on Aug. 9, when a regional high water temperature alert was issued after farmed fish died in droves due to the heat. [YONHAP]

Korea’s fishing industry is facing an uncertain future as climate change heats up its waters and changes its marine ecosystem.

Yun Byeong-seon, a researcher at the Yeosu branch of the National Institute of Fisheries Science in South Jeolla, received quite a shock this April while conducting his yearly investigation into the egg-laying patterns of anchovies on Korea’s southern coast. At a time when small fish are supposed to still be developing in their eggs, there were newly hatched anchovy larvae around one to two centimeters long swimming around in the water.

“Anchovies normally lay eggs in April and hatch in May,” Yoon explained. “But it looks like their egg-laying period has been pushed forward as water temperatures have risen.”

For Lee Jeung-nyeo, a fish farmer who raises abalones and clams in Yangyang, Gangwon, the biggest task of the summer is to make blocks of ice to cool down her fish tanks. Abalones and clams are prone to die en masse if the water becomes too warm. To prevent this from happening, Lee regularly throws a 35-kilogram (77-pound) block of ice into the tank.

There are 54 fish tanks at her farm, which means Lee has to spend most of her time in the summer making ice to cool all of them down. Even so, she wasn’t able to prevent the death of over 100,000 abalones during the sweltering summer.

Fish varieties around Korea have also changed as its waters have warmed. Yellow croakers and pacific herrings, which were common catch in the Incheon area and frequently mentioned in records from the Joseon Dynasty, have disappeared. The quantity of yellow croaker caught per year has decreased drastically from 1,400 tons in 2007 to less than a ton last year.

The fish market on Yeonpyeong Island in the Yellow Sea, which was famous for its croaker fish in the 1960s, hardly sells any now. Instead, groupers and porgies, fish usually found on Korea’s southern coast, are frequently sold in fish markets on the west coast, said a source from the National Federation of Fisheries Cooperatives.

On the peninsula’s southern coast and around Jeju Island, there have been increasing sightings of great white sharks, which live in temperate waters in subtropical regions. Whale sharks, found in the open waters of tropical oceans, were seen as far north as off the coast of Yeongdeok County, North Gyeongsang, and Samcheok County, Gangwon. Subtropical coral, such as psammocora profundacella, typically found in waters off of Taiwan, the Philippines and Australia, now live in the waters around Jeju.

The National Institute of Fisheries Science, a government institute researching Korea’s fisheries, estimates that 40 percent of all fish caught in the waters near Jeju over the last four years have been subtropical species.

The anchovies that surprised the marine researcher saw fewer numbers due to the temperature rise. Anchovies lay their eggs when water temperatures are around 15 to 25 degrees Celsius and live in waters below 30 degrees Celsius, said Yoo Joon-taek, an expert on anchovies who teaches at the Gyeongsang National University’s Marine Resources Research Center in Tongyeong, South Gyeongsang. With sea temperatures on the southern coast rising to 31 degrees Celsius this summer, it is very likely that their numbers have dropped this year.

In 2015, 210,000 tons of anchovies were caught on the southern coast, but this plummeted to 140,000 tons in 2016. Experts believe this was due to fewer hatchlings due to the warmer waters. Though the catch again rose to around 210,000 tons last year, fishermen worry that the fall catch this year will be as scarce as it was in 2016.

Similarly, fewer squid - one of the most common catches on Korea’s eastern shores - are being caught in the East Sea. Experts believe the squid population remains constant, but that their habitat range has expanded due to rising sea temperatures, thereby making them more difficult to catch.

Squid prefer warmer water and usually converge in particular areas off Korea’s eastern coast, but with the rising sea temperature, they have expanded their habitat to nearly all corners of the East Sea.

“When squid used to concentrate in certain maritime zones, we were able to use fish school detection devices to track their location and increase our catch,” said Kim Jung-jin, a researcher at the National Institute of Fisheries Science. “But since they’ve begun to spread out and inhabit a wider area, the quantity caught has decreased.”

A good example is the Imjin River estuary, which empties out into the Yellow Sea. Mullets and Chinese mitten crabs are rare catches even when they are in season. Chang Suk-jin, a local fisherman, was only able to catch three mullet fish in three of his gillnets on Tuesday. Around this time last year, he was able to catch over 30. Only around seven kilograms of mitten crabs were snared through his 500 hoop nets installed in the estuary, a tenth of what he caught last year.

In Yeosu, South Jeolla, late last month, maritime authorities issued a red tide alert and high water temperature alerts simultaneously. Red tides, caused by high concentrations of red-colored algae, usually do not occur in higher temperatures since algae activity slows down in warmer waters. Authorities from the South Jeolla provincial government and the Oceans Ministry attempted to discover the source of the phenomenon, but ultimately came up empty handed.

With their livelihoods at risk, fish farmers have been fighting an uphill battle to lower water temperatures.

“We are going out 400 meters [1,312 feet] off the coast and pulling up water seven meters deep to supply our farms with water of the right temperature,” said Kwon Jung-sook, a fish farmer in Yangyang, Gangwon. “This year 200,000 abalones died because the seawater reached 27 to 28 degrees [Celsius].” Abalones thrive in temperatures of 22 to 23 degrees Celsius.

In response to warming waters, local governments and the National Institute of Fisheries Science recommend that different species of fish more resilient to temperature change be raised. Instead of raising rockfish, which are sensitive to rising temperatures, they say farmers should raise mullet or bass. For land-based fish farms, authorities say farmers should switch from clams and abalones to scallops.

Farmers, however, balk at such suggestions. They say it is no simple task to throw away decades of experience raising a certain species. Some of the more resilient species suggested are also cheaper and less competitive to raise relative to imports, raising the barrier of entry for beleaguered aquaculturalists.