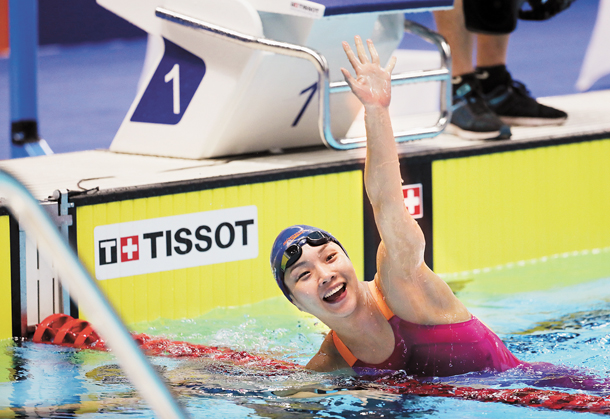 Kim finished the race in an Asian Games record of 2:08.34 at GBK Aquatic Center and gave Korea its first swimming gold medal.

This is the final day of swimming events in Jakarta. Korea has won one gold, one silver and four bronze.

Kim had the reaction time of 0.66 seconds, fourth fastest in the field of eight, but she got to the 50m point faster than anyone at 27.31 seconds.

Kim stayed in first place at the halfway mark at 59.37 seconds. The Korean was still in the lead after 150m at 1:37.60 and held on for the record-setting victory.

Kim is Korea’s first Asiad swimming champion since Park Tae-hwan won three gold medals and Jeong Da-rae added another in 2010. The last Korean to win an individual medley gold in the Asian Games was Choi Yun-hui in the women’s 200m in 1982.

The swimmers in the medley started off doing a butterfly, then the backstroke, breastroke and freestyle.

Kim said she was a bit surprised to still be in first place after the breaststroke portion, and she sensed that she could pull away in the freestyle stretch.

“I wanted to go all in on breaststroke and freestyle, and things went according to my plan,” said Kim, who has struggled in breaststroke in her previous medley races. “When I saw that I was in first place heading into the last stretch, I felt I could get the gold medal if I really dug deep.”

She said she was happy to break the Asian Games record and the gold medal made it that much sweeter.

“I don’t even know how I felt when I touched the pad,” Kim said. “It was just an overwhelming moment.”