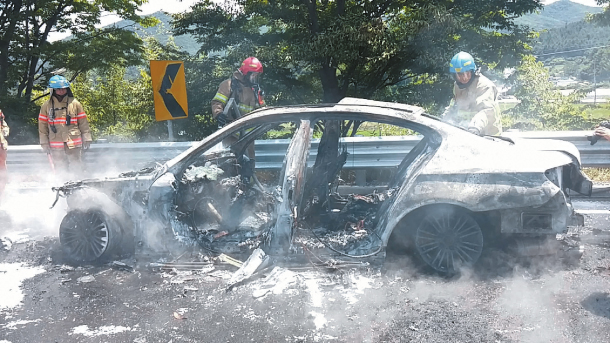 A BMW 520d sedan is completely burnt out after catching fire on Aug. 2 on the Yeongdong Expressway in Wonju, Gangwon, headed towards Gangneung. The fire was put out 20 minutes later and the driver and passenger were unharmed as they quickly exited the vehicle. [YONHAP]

A record-breaking heat wave got even hotter this summer as BMW cars started bursting into flames across the country. More than 40 BMW vehicles caught fire in Korea this year, with the situation getting so dire that the government banned some of the cars from roads.

The combusting cars created such a furor that the German automaker was forced to announce a huge recall and hold a public press conference to apologize and try and explain the root of the issue. BMW blamed an engine part called the emission gas recirculation (EGR) system, but experts and owners are not convinced.

Here’s the basics on the fire-prone vehicles, BMW’s response and why officials and owners are still looking for answers.

Q. How many cars has BMW recalled?

Korea’s Transport Ministry approved BMW Korea’s recall plan of 106,317 cars of 42 diesel models on July 26, although the actual recall began on Aug. 20 after the automaker secured enough parts from the German headquarters.

To try and stop the fires, BMW Korea started providing safety checkups at after-sales service centers on July 30. Technicians checked the EGR module for any immediate issues, although the cars will still be recalled. As of Wednesday night, 102,000 of the 106,317 eligible cars have been checked.

BMW Korea initially pledged to complete the recall by the end of this year, but it is highly likely to be delayed as it couldn’t meet the deadline, scheduled for Aug. 14, to complete the checkups. BMW Korea said 18,500 new EGR modules have been secured so far. Excluding the 1,860 cars that had new EGRs installed during the checkups, approximately 86,000 modules have to be replaced in the next four months.

Q. Are the 42 recalled models the only ones to have been involved in the fires?

Recall-subjected cars that have been through the checkup process and have been deemed safe have also caught fire. A total of three cars that had been inspected caught fire according to local reports. Most recently, a 520d model that didn’t have any parts replaced during safety inspections caught fire in Mungyeong, North Gyeongsang, on Aug. 20.

Q. Why haven’t the other models been recalled?

BMW only installs the problematic EGR module in diesel vehicles, so gasoline models have not been recalled.

The diesel models that have been recalled were ones produced between 2011 and 2016. Those that launched after 2017 have a revamped EGR module, according to the carmaker. The fully overhauled 5 Series, for example, which launched in Korea in 2017, has been equipped with the revamped EGR.

That said, there have been at least two reports of EGR-free gasoline BMWs bursting into flames this summer.

Q. What does BMW say is to blame?

BMW has made it clear that it believes the EGR module is the only cause of the fires. At the press conference on Aug. 6, Johann Ebenbichler, vice president of BMW’s corporate quality team, said a leakage of coolant from the EGR cooler and accumulated sediment in the EGR pipe are the root cause of the fire.

“It is very clear that the root cause is only a hardware issue,” the vice president affirmed. But some BMW officials had other ideas.

BMW spokesman Jochen Frey caused a minor scandal when he told Xinhua News Agency that Korea’s “local traffic conditions” and “driving style” may be a cause of the fires. The automaker quickly refuted the article, claiming that it was a translation error.

Q. What are the issues with this explanation?

Koreans are not convinced by BMW’s explanation. In fact, the Aug. 6 press conference only stirred suspicions here.

During the briefing, Ebenbichler said that all BMW cars are equipped with the same EGR module worldwide, adding that the software in cars sold in Korea is the same as those sold in the EU market. He also said that the EGR defect rate in Korea is 0.1 percent of diesel cars sold, while the global average is 0.12 percent.

But Ebenbichler’s explanation did little to explain why such a disproportionate number of vehicles are bursting into flames in Korea.

Q. What other theories are there that could explain the fires?

There are plenty of rumors and speculations surrounding the burning BMWs, but little proof that any of the theories are any more correct than the automaker’s EGR argument. The nature of the fires makes it very difficult to gather any evidence on possible causes as little of the vehicles are left for investigation.

Software manipulation - an approach that Volkswagen took back in 2015 in an attempt to trick emissions tests - has been raised as one possibility.

Kim Pil-soo, an automotive engineering professor at Daelim University, said that the EGR is operated by a piece of software called the ECU. If the EGR malfunctions, it makes sense to check the software as well, according to the professor.

In fact, when the Ministry of Environment rolled out emissions tests on 20 imported car models in 2016 after the Volkswagen incident, the BMW 520d was the only model that passed the test. It emitted 0.07 grams of carbon dioxide per kilometer (g/km) while the average was 0.48g/km.

Some people think that BMW manipulated the software so that the EGR would work above its usual capacity to reduce the emissions level. Others believe that it’s not the software that’s at issue, but the weak physical structure of the EGR that caused the module to leak.

Q. Have there been similar incidents in other countries?

Before the fires began here there were two recalls in Britain and the United States due to a risk of fire, but not because of faulty EGR modules.

Last year, BMW recalled 1.4 million vehicles in the United States due to fire risks that derived from two different factors. A malfunctioning valve caused the recall of 740,000 cars, while an additional 670,000 were recalled because of wiring overheating in the air conditioning system.

The same overheating defect led to 300,000 vehicles being recalled in Britain in May.

Q. What measures has the government taken?

After receiving a number of insufficient reports from BMW Korea, the Ministry of Transport announced earlier this month that it would run its own probe into the incidents.

The ministry said it would form a separate team comprising of industry experts from the private sector. It also said it will look into whether the German automaker had attempted to conceal defects or delay the recall.

On Aug. 15, when public concern was at its peak due to the spate of fires, Transport Minister Kim Hyun-mee ordered uninspected recall-subjected BMW vehicles off Korean roads.

Q. When are we likely to get real answers?

At the moment, there is no guaranteed timeline of when we will actually get a clear answer.

BMW Korea is sticking to their EGR explanation and it is now up to public or private investigations to get to the bottom of the case. There have been multiple attempts to do so including the Transport Ministry pledging to complete its separate investigation by the end of this year.

Some 21 BMW owners have filed criminal charges against six executives from BMW including the Korean unit’s chairman Kim Hyo-joon, claiming the German automaker attempted to cover up defects that could lead to fire risks and delayed the recall. Ha Jong-sun, an attorney representing the plaintiffs, said some 300 more owners are scheduled to join the legal action.