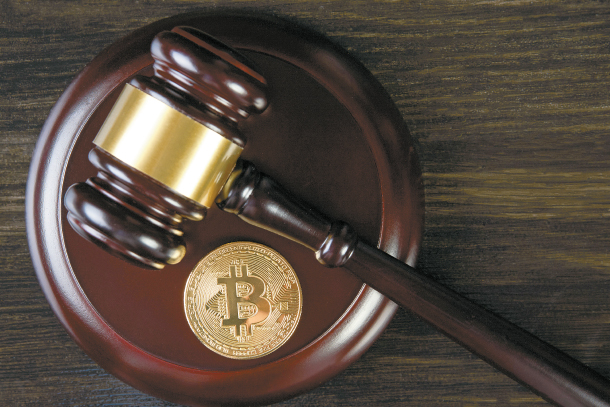 Will blockchain finally be integrated into Korea’s regulatory framework?

On Aug. 24, the “Blockchain Law Society,” a think tank dedicated to the cause, officially launched.

The think tank was established by legal experts in Korea from the public and private sector to examine legal issues in the burgeoning blockchain industry and search for ways to finally bring the distributed ledger technology under the scope of the law.

“Blockchain technology is a social technology, which means the width and depth of its development will be dependent on how we create the regulatory framework and system,” said Lee Jung-yeop, a founder of the think tank and a presiding judge at the Daejeon District Court, during the inaugural meeting at the Seoul Central District Court on Friday. “I believe it can fundamentally change the structure of our society and I suggest that we establish a legal think bank so that [the legal community] can make a contribution.”

The think tank started its first official meeting with 210 members. It included judges and prosecutors, lawyers from local law firms as well as finance and law professors from universities in Korea.

The launch of the think tank is a clear indication that Korea’s blockchain industry has developed to the point where the legal community believes the technology must be properly regulated.

Blockchain is a data storage system in which information is saved in publicly distributed ledgers rather than on a centralized system.

Information stored via a blockchain system is nearly impossible to hack because all the ledgers are split and saved on all the computers involved in the system. Party members are incentivized to participate in the system because they receive rewards through coins or tokens, which are valuable assets that can be used in ecosystems, such as bitcoin, that the participants are members of.

The lack of a clear regulatory framework is one of the major uncertainties threatening the emerging industry.

Blockchain itself first came to the attention of many Koreans in 2017, when the cryptocurrency boom swept the entire nation. 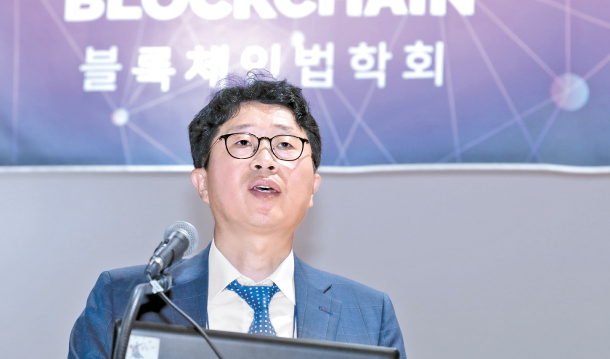 Lee Jung-yeop, founder of the Blockchain Law Society and presiding judge at the Daejeon District Court, speaks during the inaugural meeting of the think tank Friday at the Seoul Central District Court. [KIM KYUNG-BIN]

Koreans were so into cryptocurrency trading that the prices of major digital coins, such as bitcoin and Ethereum, were as much as 20 to 25 percent higher in Korea than the global average, a phenomenon that market watchers dubbed the “Kimchi premium.”

Cryptocurrency fever became a regulatory headache for the government.

Unable to calm down the local cryptocurrency market, Park Sang-ki, the minister of justice, announced on Jan. 11 that the government was mulling legislation that would completely ban the operation of cryptocurrency exchanges in Korea, spreading panic among investors.

After his statement, the price of bitcoin, which hovered well above 20 million won ($17,881), fell by nearly half after just two days.

While the cryptocurrency craze died down, blockchain projects have continued to develop in Korea. But the government, although it claimed that it would promote the industry, has not come up with any regulatory framework, including on how it will regulate initial coin offerings (ICO). ICOs are a fund-raising process used by blockchain start-ups which the government said would ban last year, although no legislation on the matter has been passed.

Top government officials, such as Choi Jong-ku, chairman of Financial Services Commission, repeatedly said the government is trying to come up with rules to regulate the industry, but nothing has since come out. While the government banned the use of anonymous accounts when buying and selling digital coins, this was just the tip of the iceberg of the entire blockchain industry.

Meanwhile, unable to cope with uncertainties in the local market, many promising Korean blockchain start-ups are heading overseas to launch ICOs and other projects, a situation which many experts called as “capital and talent exodus.”

Koo Tae-eon, a managing partner at Tek&Law, a law firm that specializes in technology-related cases, says the blockchain industry cannot be regulated by existing law in Korea.

“Issues on blockchain and cryptocurrency assets have new characteristics that the existing law cannot embrace,” said Koo. “Our country is notorious for its over-regulation. It is difficult for entrepreneurs to innovate, and we are at a juncture where we should adopt an approach where we allow operations first before imposing regulations.”

Koo listed a number of factors as needing legal clarification, including how the Capital Markets Act - which is used to regulate financial investment - could be applied to cryptocurrency trading, as well as how the government could legally define coins and tokens.

The tech lawyer proposed the idea of a “blockchain act” at the meeting, which would include a special tax on earnings made by blockchain companies or through cryptocurrency trading.

He also proposed that blockchain companies be freed from local privacy law, which is considered stringent compared to similar laws in other major economies, such as Japan. Korea’s strict privacy law makes it difficult for companies to utilize personal data, regardless of the sensitivity of the information, which is crucial to increase the quality of their service, Koo added.

Other experts at the meeting on Friday said different legal concerns must be addressed.

One of the research projects proposed at the meeting was institutionalizing cryptocurrency exchanges, many of which currently exist outside of legal boundaries.

Lee explained that the current regulations applied to the activities of cryptocurrency exchanges are mostly self-made, which often makes it difficult for investors to trust transparency of the regulations.

For instance, there are no clear grounds for how the exchanges evaluate coins or tokens before listing them on their exchanges for investors to buy and sell, Lee said

“The lack of clear information and legal grounds are big problems,” Lee added. “But it’s also difficult for the government to regulate the cryptocurrency exchanges with the traditional Capital Markets Act, which is why we want to think about a new regulatory framework that could regulate their activities.”

Seo Dong-ki, a public accountant, also raised the issue of recognizing coins or tokens as assets and levying taxes on their owners accordingly.

“The development of blockchain technology is quite explosive. But still, there are no standards on how to regulate the economic exchanges done through this technology,” said Seo. “We need to figure out how to recognize the trading [of coins] and how we can include them in our existing accounting standards to approach the taxation issue.”

Another problem pointed out at the meeting was ICOs.

“In the case of ICOs, they have become a new means of fundraising, and they are expected to be a catalyst for technological innovation and a profit-sharing economy,” said Lee Chan-hee, a lawyer and president of the Seoul Bar Association. “But on the other hand, we are seeing a number of issues such as fraud, pyramid schemes and illegal fundraising activities. The number of victims is on the rise despite the government crackdown and regulations.

“I believe our task is to adopt proper regulations and guidelines based on academic research and hands-on experience in law to expand the benefits and opportunities presented by cryptocurrency and address the various issues stemming from the paradigm shift into decentralization,” Lee added.

A total of 12 projects were proposed at the meeting.

The projects will be listed on a blockchain-based platform. Lead researchers can find team members through the platform. Their contributions will be graded based on their role and participation in the projects.

The research projects themselves are assessed by the public as well as other academics. They will be available on the website for review. In the long term, the assessment of the projects will be tokenized to give economic incentives to researchers to increase the quality of their work.

“I think this model could be adopted widely by other think tanks around the world,” said Lee Jung-yeop. “It provides a more transparent and incentivized solution to academic research.”