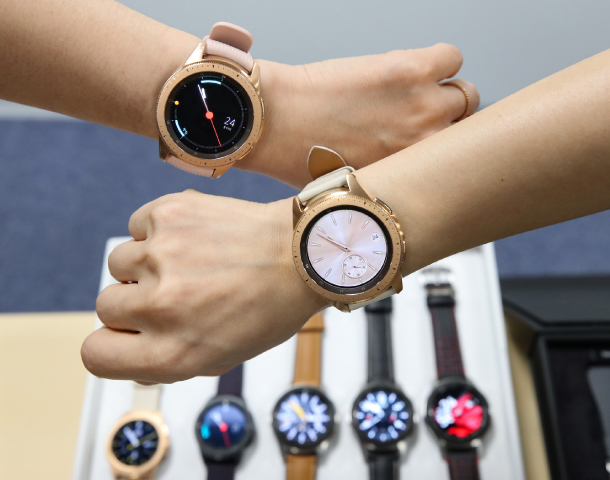 Out of two new Galaxy Watch models, one works through a connection to a smartphone via Bluetooth. Its sales start today. The second, which operates totally independently via phone networks, will be available for purchase on Friday.

The new watches were unveiled at a so-called unpacked event for Galaxy Note9 phablets in New York on Aug. 9. They are the first smart watches from Samsung that have lost the “Gear” brand name. Samsung is now the world’s third-largest wearable producer after Apple and Fitbit.

The Galaxy Watch has been designed to automatically track the time spent and calories consumed on six types of exercise including walking, running and biking. Users may designate 33 more types of physical exercise, the largest number available for any smart watches on the market. The watch can keep track of users’ stress levels through a heart rate sensor and encourages users to breathe deeply to lower the stress level through notifications.

The watch also syncs with the health application of a Galaxy smartphone.

Samsung said the biggest improvement in the Galaxy Watch is its long battery life, ending the hassle of having to charge the watch every day. A 46-millimeter Galaxy Watch can run for 80 hours, or more than three days, at a minimum on a single charging and a 42-milimeter model can run 45 hours at the minimum. The LTE-enabled Galaxy Watch can receive or make phone calls without being tethered to a smartphone. But the watch can be used on the same account used for an owner’s smartphone and via the same phone number.

Prices of the Bluetooth-enabled models start from 339,900 won ($305) and the LTE-enabled models from 379,500 won. They can be bought from Samsung online or at Samsung Digital Plaza stores nationwide, mobile carrier stores, department stores and discount chains.