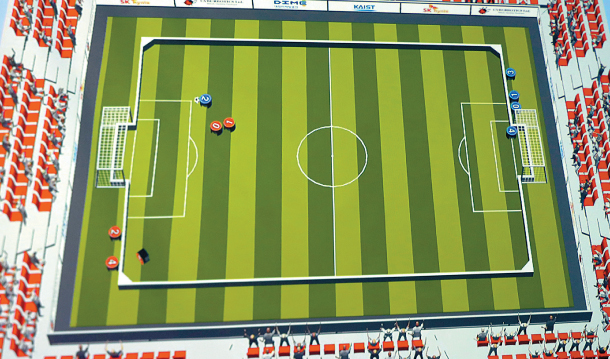 Artificial intelligence-powered players play football at the Korea Advanced Institute of Science and Technology in Daejeon during the AI World Cup on Wednesday. [YONHAP]

Two years after the historic match between AlphaGo and Lee Se-dol, Korea played host to another contest designed to test the potential and limitations of artificial intelligence.

This time around, the area of interest is football.

The Korea Advanced Institute of Science and Technology (Kaist) held the AI World Cup in Daejeon last week, proving that artificial intelligence is ready to take on the world of football.

The three-day competition saw 24 teams from 12 countries pitted against each other. Kaist ultimately took the win, beating competitors from as far afield as Google, the Massachusetts Institute of Technology and the National Cheng Kung University.

The AI World Cup was a variant of five-a-side football. Each virtual team consisted of five cube-shaped players of different colors that were pre-programmed with AI algorithms. The teams face off on the virtual football field, playing shorter games with five-minute halves.

Kim Woo-joon, a PhD student at Kaist and the leader of the winning AFC-WISRL team, said that the result proves the powerful capacity of reinforcement learning used in the football match. Reinforcement learning is a central type of machine learning that lets software agents learn from the environment and receive rewards by performing certain actions.

“The players are trained with an algorithm based on Q-learning, a kind of reinforcement learning,” Kim said.

“The algorithm is designed to maximize rewards if an agent follows through with optimal action selections.”

Kim explained the key to beating out all the advanced algorithms lies in a myriad of simulation practices that his team has done.

“A robot can make five steps in one second in the algorithm,” Kim said, referring to certain actions that a robot can take.

“We simulated 3 million different steps to see the optimal result depending on different circumstances.”

As much as the AI technique is sophisticated, the head of the organizing committee said that the main goal of the event is to raise awareness of the “entertaining” aspects of AI.

“People would like to see the progress made by the technology,” said Professor Kim Jong-hwan, chair of the organizing committee.

“But a more essential question is how the technology can contribute to the happiness and well-being of humankind. The AI World Cup was held to show artificial intelligence can entertain people.”

As noted by Kim, spectators seemed to have a good time while watching the games. The audience was especially amused when things went wrong - at one point, an AI player couldn’t handle the pressure and stood completely still when they had a chance to score.

The World Cup also featured AI-powered journalists and commentators for the games and lectures from AI specialists.