Seoul will shelve a recently declared plan to develop Yeouido and Yongsan areas because of recent real estate speculation in the city. 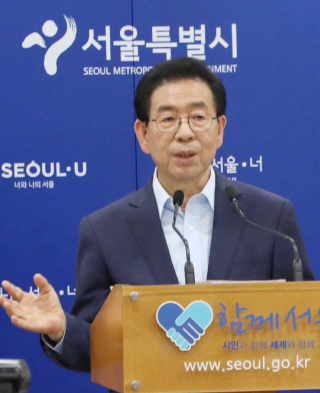 “The Seoul city government hereby postpones the announcement and implementation of the Yeouido and Yongsan Master Plan,” Seoul Mayor Park Won-soon told the press at City Hall on Sunday. “It is concerned about the recent activities in the housing market in Seoul.”

When he was in Singapore last month to receive the Lee Kuan Yew World City Prize, Park proposed to transform Yeouido, home to the National Assembly and headquarters of several financial institutions, into a mixed residential-commercial island and build a convention center above the railroad tracks between Seoul Station and Yongsan Station in a project modeled after the Paris Rive Gauche.

Details of the plan were to be revealed in September.

But on Sunday, Park called that off, blaming rising real estate prices.

According to the Korea Appraisal Board, the average price of apartments in Seoul had been on a steady rise before they jumped last week.

The Ministry of Economy and Finance said in a meeting with the Land Ministry, Financial Services Commission and the National Tax Service last week that speculative activities had spiked to worrying levels in Seoul. A list of districts with high speculation announced by the Land Ministry earlier this month included Gumcheon, Gangbuk, Dongdaemun, Gangnam, Seocho, Yongsan, Yeongdeungpo - where Yeouido is located - and Mapo.

Some experts said part of the speculation had to do with Park’s promise of development plans. Park had also announced a plan to develop Gangbuk District on Aug. 19, after completing his one-month stay in a rooftop house in the area to experience the locals’ lives.

The plan included the building of four additional light rail lines in areas outside of Gangnam, with a plan to start construction before 2022. Two will be in northeastern Seoul and the other two in southwestern Seoul.

“After these development plans in Gangbuk were announced, the prices of residential real estate across Seoul rose altogether,” Ham Young-jin, head of the big-data lab at real-estate app Jikbang, told the JoongAng Ilbo.

“Movements in the real estate market are usually caused by more than one factor,” he said. “But the city government completely agrees with the central government’s position that stability in the housing market must be a priority.”

Park said the plans for Gangbuk still stand. “Development plans for Gangbuk is mostly about developing local economies and businesses,” Park said. “We will press on with the plan to buy 1,000 empty houses to provide more public housing.”