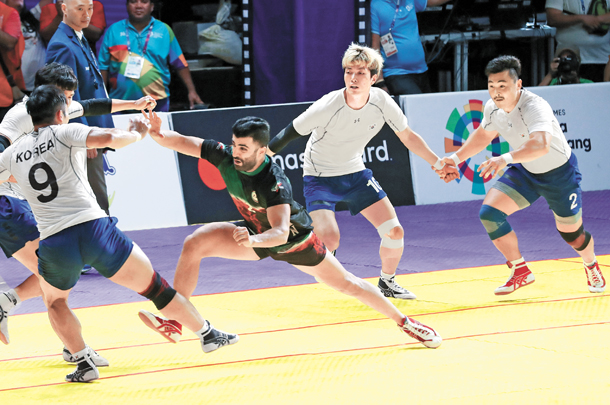 Korea, in white, competes against Iran in the men’s kabaddi final at the 2018 Asian Games on Friday. [YONHAP]

There are some sports at the Asian Games that are dominated by the same country every year. Typically this happens because a sport originates from a certain area - China is likely to win at wushu, Korea at taekwondo and Thailand at sepak takraw. In contact sport kabaddi, India nearly always comes out on top.

But at the 18th Asian Games, an unfamiliar country barged its way into the final on Aug. 24. Just 11 years after the Korea Kabaddi Association was first established, the Korean men’s team won silver in a shock final that, for the first time in Asian Games history, did not include India.

Though the team lost 15-26 to defending champion Iran in the final, a silver medal was the team’s best-ever finish. Not only that, Korea defeated seven-time Asian Games gold medalists India 24-23 in the group stages and faced down Pakistan, a team that has never not been in the final four, in the semifinal.

Kabaddi is a traditional contact sport originating from India. The aim of the game is for a “raider” to get to the opposing side of the court and tag out as many defenders as possible and then return to his side. However, the raider has to do so without getting tackled and while constantly repeating “kabaddi, kabaddi, kabaddi” constantly so as not to draw a single breath.

On a 12.5-meter by 6.25-meter (41-foot by 20-foot) court, points are scored for each player tagged by the raider while the opposing team can earn points by stopping the raider.

Korea started to appear as an unexpected contender on the kabaddi court in 2014, taking bronze at the Incheon Asian Games. Despite Korea’s rise, beating India in the group stages came as such a huge shock that it sent ripples through the kabaddi world. In kabaddi circles, the upset was even more impressive than the Korean football team defeating top-ranked Germany at the 2018 FIFA World Cup.

“More than any other country, I felt the most confident against India,” said captain Lee Jang-kun. “[When we won,] I think the Indian reporters and players seemed to have their pride hurt. They ignored my greeting. They were really surprised. Two years ago at the World Cup opening match, we won against India. Since a lot of the people commented that we were lucky, we wanted to prove that it wasn’t just luck.”

After defeating India, Korea turned its attention to some other South Asian countries. Korea defeated Sri Lanka 33-23 on Thursday to advance to the semifinals, where it defeated Pakistan 27-24.

In kabaddi, Lee is something of a super star. He started playing the sport in 2011 and was signed to the Bengal Warriors just three years later in 2014. Lee is now the Warriors’ starting raider and the third-highest paid player in the Pro Kabaddi League.

Kabaddi is incredibly popular in India, and Lee is one of its biggest stars.

“In India, there may be people that don’t know who BTS is, but they all know Lee,” said Cho Jae-ho, head coach of the Korean kabaddi team.

Since high school, Lee has been an all-around athlete, playing football and rowing. However, his career in the two sports didn’t last long, as he didn’t have much interest in football and his rowing team wasn’t good. Rather than playing a certain sport, Lee decided to enroll in physical education, and that’s when he first encountered kabaddi. When he first saw the sport, he said, “Kabaddi [was] a sport that I fell in love [with] at first sight.”

Despite Lee’s affection for the sport, Korea lacked facilities and infrastructure as the Korea Kabaddi Association wasn’t established until 2007. Not only that, there wasn’t a single amateur team and the sport was only played among college teams.

Knowing all the difficulties, Lee still decided to devote his career to the sport in 2011, when he started attending Dong-eui University. In 2013, Lee’s life changed once again, when he played in the Asian Indoor and Martial Arts Games. At the time, Lee led Korea to a bronze medal finish and caught the attention of the scouts in the Pro Kabaddi League.

From his experience in the Indian league, Lee led Korea to win bronze at the 2014 Asian Games in Incheon. In 2016, he led Korea to defeat India at the Kabaddi World Cup.

“After winning against the top-ranked team in international events, we’ve become a role model to the other teams,” Cho said. “And behind the success, there’s Jang-kun. His physical and psychological skills have become good examples to the younger players.”

Though the sport is still unheard of in Korea, it has developed significantly, as eight of the players on the Korean national team currently play in the professional league in India. In addition to continuing his success in the sport, Lee hopes to expand the popularity of the sport in Korea.

“Kabaddi is my life now,” Lee said. “[Kabaddi] figured out my future, but now I want to help provide a better environment which can allow young players to develop.”