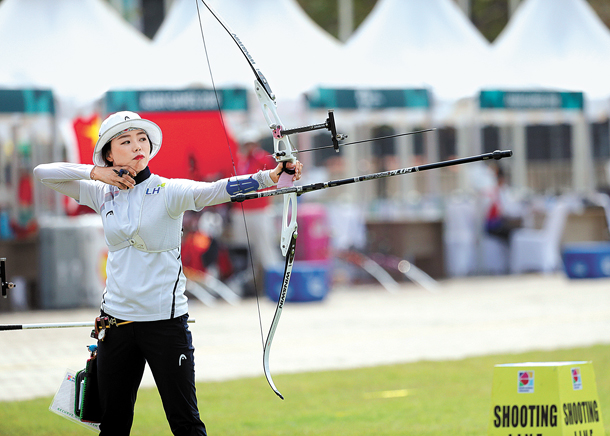 Chang Hye-jin competes in the recurve women’s team final against Taiwan at the 2018 Asian Games at GBK Archery Field in Jakarta, Indonesia, on Monday. [YONHAP]

“This gold medal feels so precious because we all had to come together in difficult times,” Chang was quoted as saying on Yonhap. “We all trusted each other and pulled each other through some challenges.”

With the win, the women’s team successfully redeemed themselves after a disappointing finish in the individual event last week. In the individual event, both Chang and Kang failed to advance to the finals, leading to the recurve women’s individual final being competed without a single Korean archer for the first time in Asiad history.

“I felt terrible about disappointing people who love and support archery,” Chang was quoted as saying. “I thought I’d destroyed people’s faith in Korean archery. But I think this medal will make up for all that. I think we will be able to grow even more after this competition.”

The recurve men’s team hoped to continue Korea’s gold medal streak but had to settle with silver, losing 3-5 to Taiwan. The men’s team of Oh Jin-hyek, Kim Woo-jin and Lee Woo-seok failed to defend their title in the team event. Since archery was first competed at the Asian Games in 1978, the men’s team has won eight golds and a bronze in the event. This is the first time the team has taken silver.

Though they failed to win gold as a team, the men will take home gold and silver in the individual recurve event as Kim and Lee will compete against each other in the final today.

After the two team events, Korea finished the day with another silver in the newly added compound mixed team event, losing 150-151 to Taiwan. The Korean compound archery team will add two more medals today as the compound men and women’s teams compete in their respective finals.