With ‘Idol,’ BTS encourages fans to seize the day

With ‘Idol,’ BTS encourages fans to seize the day 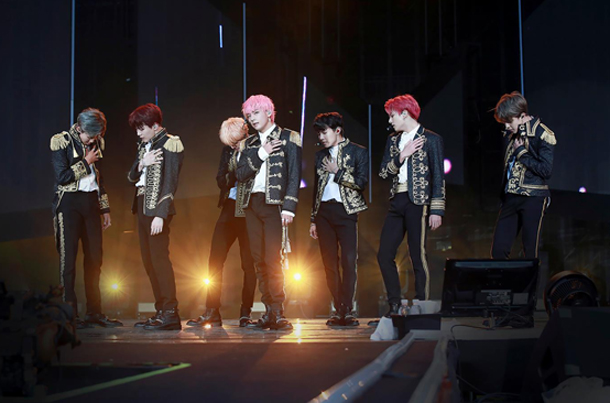 As top K-pop group BTS brings its “Love Yourself” album series to an end with its fourth and final record under the theme, the boy band wanted to send out the message of carpe diem through the festivities featured in the album’s main track “Idol” and its music video, the septet said Sunday.

The members defined the overriding theme of “Idol” and their ongoing world concert tour, “Love Yourself,” as “festival” in a news conference held at Jamsil Sports Complex, southern Seoul, ahead of their concert here.

The two-day concert from Saturday to Sunday in Seoul marks the beginning of BTS’s world tour, which will take the band to 16 cities in the United States, Canada, Britain, the Netherlands, Germany, France and Japan through February next year.

The tour kicked off after BTS released “Love Yourself: Answer,” the finale of the four-part Love Yourself album series, which delved into a philosophical search for a true self through a tricky process from the start to end of love.

“When you think of a festival, its preparations take place for a very long time, but the festival itself terminates very quickly in a very brief moment and leaves behind tons of garbage, as our concert does,” member RM said.

“I think life is the same as a festival. Happiness lasts for fleeting moments, leaving behind some snapshot images of the moments,” he said, explaining why the latest album draws on festival as the final answer to the questions the “Love Yourself” album series poses.

“So the final conclusion to [the theme] ‘Love Yourself’ should eventually be a festival,” he said. “After grappling with many questions, we wanted to draw the message that [we should] enjoy life and seize the fleeting [happy] moments,” RM said, referring to the message of the famous Latin aphorism “carpe diem.”

The main single, “Idol,” is a cornucopia of references to BTS’s previous songs, and the song has already proved to be a megahit. The EDM song and its music video are primarily based on South African beats, unusually adopted elements from traditional Korean music or gukak and traditional Korean images like the traditional Korean garment hanbok and a Korean pavilion.

The adoption of such traditional Korean elements was “accidental,” not “intentional,” the members said, indicating that they picked them up while searching for images of festivities.

“It wasn’t that in this album we wanted to demonstrate things Korean because we have done so well so far [in the world],” member Suga said. “The feel we wanted to show is that of a festival that brings together people of difference races, sexes, ages,” he said, referring to the music video’s last scene, where a crowd of many different kinds of people join the boy band’s dancing. Yonhap