KIM SU-JEONG
The author is an editorial writer for the JoongAng Ilbo. 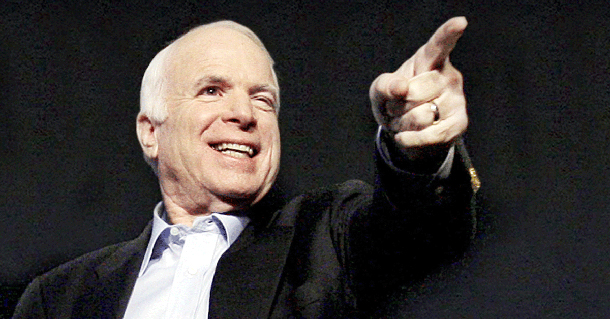 Washington is cherishing the memory of John McCain. The media and politicians, from both the right and left, are mourning him. The Vietnam War hero was a prisoner of war and then served as a Republican Senator for 36 years. He was praised as a “patriot who has dedicated his life to serving his country” and an “American original.”

Some photos show how he lived his life. During the Vietnam War in 1967, his plane was shot down and McCain fell into a lake. He was pulled out by North Vietnamese soldiers and local residents from the airplane. One photo shows a severely injured McCain in a Hanoi hospital. The North Vietnamese Army found out that his father was a high-ranking admiral and offered to negotiate for his release. However, McCain refused the offer, and stayed with other prisoners for four years. His life was considered to be a model of noblesse oblige, and he was respected as a politician of conviction.

Dignity was McCain’s legacy. He never lost his dignity, even when he criticized others. He always had respect for other politicians, despite their extreme divisions. He never insulted his opponents. “Let there be no reason now for any American to fail to cherish their citizenship in this, the greatest nation on Earth,” he said in his concession speech to Barack Obama in the 2008 presidential election. During the campaign, one of his supporters mentioned Obama’s race and said that she couldn’t trust him because he was “an Arab.” McCain then took the microphone and said, “No ma’am. He’s a decent family man, a citizen that I just happen to have disagreements with.”

In “Character is Destiny,” which McCain co-wrote with Mark Salter, he wrote, “I don’t believe in destiny. I believe in character.” He argued that no one is destined to be a certain way, and that character is what decides things. In his memoir “Restless Wave,” which was published in May while he was fighting brain cancer, he focused on self-reflection. Speculation before its release focused on whether McCain would strongly condemn Donald Trump, who uses rough language and fractures alliances in the name of national interests.

Cherishing John McCain gives us a chance to reflect on the age of lost dignity that Trump has caused. How about Koreans? Social media has become a weapon of verbal warfare. Some politicians attract attention with provocative language. They get some attention in the beginning, but eventually people will grow to detest their politics. With the death of John McCain, we need to ruminate on his politics of dignity.