Emart’s 2nd-gen Pepper is chattier than before

Emart’s 2nd-gen Pepper is chattier than before 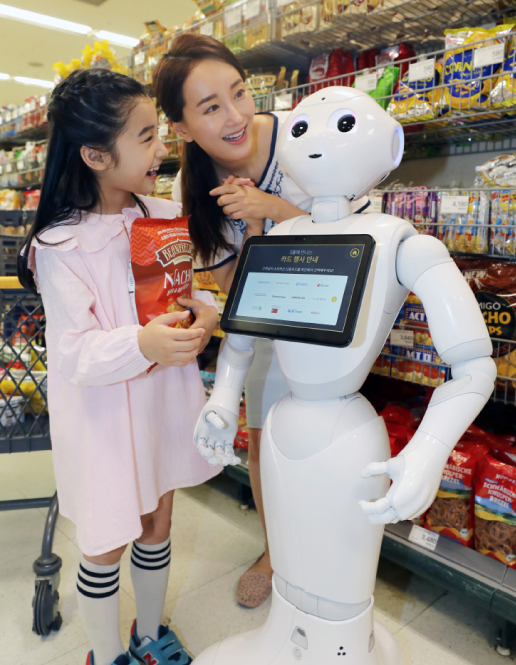 An upgraded version of Emart’s humanoid Pepper robot will start roaming the aisles of the retailer’s Seongsu branch in eastern Seoul starting tomorrow.

Pepper is a humanoid robot developed by Japan’s SoftBank Robotics. Its main function is emotional perception and communication with humans at stores or at home. Emart developed programs tailored to using Pepper as an assistant to customers.

The company said Monday the robot will serve as a guide for customers at the Seongsu branch’s imported food section three times a day between tomorrow and Sept. 12.

This is the second test run for Pepper. Emart first sent the robot to its Seongsu store in May. The difference from three months ago is that Pepper can now move by itself.

Pepper’s conversation skills have also received an upgrade. In May, Pepper was able to respond to simple questions on promotion events and offer product information after recognizing products with its camera.

The new Pepper is smarter. It now has an artificial intelligence-based chat function that helps it engage in longer conversations. The robot also has access to data from SSG.com, the ecommerce website of Emart’s parent company Shinsegae, so it can make suggestions from various product categories. “For example, Pepper can spot a consumer lingering around the imported food corner, step up to them to ask which dish they plan to cook and propose a sauce that would best suit their needs,” said Emart in a statement.

Many retailers are finding ways to use technology to downsize their workforce. The most common form of automated retail is electronic kiosks. Many eateries, from chains like McDonald’s to local non-franchise eateries, have machines for taking orders.

Service robots like Pepper are becoming increasingly popular. Delivery app Baedal Minjok launched the robot server Dilly at a Pizza Hut branch earlier this month to transfer pizza from the kitchen to tables. In January, local coffee franchise Dal.komm Coffee launched b;eat, an automated coffee-making robot, which it installed at 10 of its coffee shops across Korea.

“The primary purpose for the service robots that are coming out nowadays is to offer an entertaining point to enhance the consumer experience at their stores,” said Ryu Han-seok, an IT columnist. “Brick-and-mortar retailers haven’t had anything attractive and differentiating to show to consumers recently.”