Taking classical sounds to the streets : The Mapo Performing Arts and Tourism Festival brings music to unexpected places in Seoul

Taking classical sounds to the streets : The Mapo Performing Arts and Tourism Festival brings music to unexpected places in Seoul 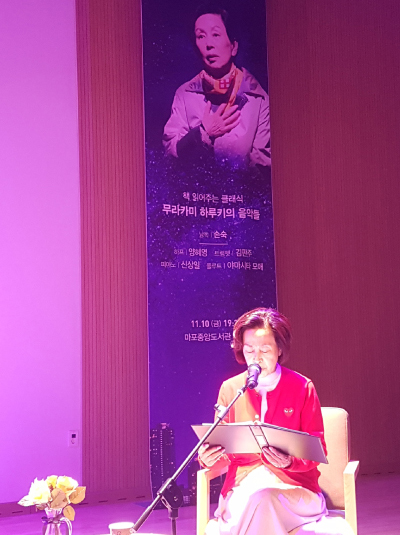 Veteran theater actor Son Sook, the director of Mapo Cultural Foundation, reads excerpts from a book by author Haruki Murakami as musicians play music in the background during last year’s festival. This year, actor Park Jeong-ja will be reading poems at the Mapo Central Library on Sept. 20. [MAPO CULTURAL FOUNDATION]

Mapo District in western Seoul seems to attract more and more young Koreans and foreigners to its neighborhoods every year. The famous clubs in Hongdae have been a major hub of Korean nightlife for decades while neighborhoods like Yeonnam-dong have emerged as hip enclaves following the establishment of the Gyeongui Line Forest Park and the Gyeongui Line Book Street. Youngsters are also flocking to Sangsu-dong and Mangwon-dong, which are filled with Instagram-friendly restaurants, bars and cafes.

Although the district seems rich in culture, the Mapo Cultural Foundation believes there’s something missing that can really make Mapo District a cultural hub that can link the different neighborhoods and attract both young and old, locals and foreigners to the whole district. The foundation says the solution is classical music.

“Unlike pop culture, classical music tends to appeal to everyone, regardless of their age, gender and ethnicity,” said Son Sook, a veteran theater actor who is also the director of the foundation’s board. “It is certainly not a genre that people can easily approach, but once they do, it is definitely one of the most attractive and durable.”

That is why the Mapo Cultural Foundation launched the M-PAT Festival three years ago. The first event, according to the organizers, was smaller in scale, only running for nine days and showcasing non-verbal performances rather than classical music. Last year’s event was longer and filled with more classical music, attracting about 140,000 people over the course of the 60-day festival. This year’s third edition, the organizers say, will go on for about 50 days, from Sept. 5 to Oct. 26. Because of the large number of foreign visitors to last year’s festival, the foundation decided to upgrade this year’s event with a new name - the Mapo Performing Arts and Tourism Festival.

“We saw that this festival could become both a classical music and a tourism festival,” Son added. “Foreigners can enjoy the festival and tour around Mapo District to find out what one of the hippest districts in Seoul has to offer.”

This year’s festival has expanded the scope of its performance venues, adding live clubs and guest houses in Hongdae as places to check out performances.

The upcoming festival will feature some 500 artists and about 70 performances throughout the district under the slogan, “A city of classical music.”

The opening concert will be held at 8 p.m. on Sept. 5 at the Art Hall Mac in Mapo Art Center. Singer Hwang Chi-yeul, who has many fans in Southeast Asia will be the emcee of the concert featuring violinist Zia Shin, soprano Park Ha-na, tenor Kim Keon-woo and the Prime Philharmonic Orchestra under the baton of maestro Lee Tae-young. The artists will be performing familiar classical music for the public including Franz von Suppe’s “Dichter und Bauer Overture,” Tchaikovsky’s “Polonaise” from the opera “Eugene Onegin,” among others. The concert, like all programs for the festival, is free upon reservation at the foundation’s website www.m-pat.kr.

As for concerts, the foundation decided to turn three clubs into classical music venues on three Fridays during the festival. At Rolling Hall on Sept. 28, baritones Woo Joo-ho and Song Hyung-bin, soprano Hong Ye-seon and tenor Lee Myung-hyun will sing songs from famous operas including “Carmen,” “La Boheme,” “Don Giovanni,” “Rigoletto,” and “La Traviata.” The concert starts at 6 p.m. Following this on Oct. 12 at V Hall, marimba trio Mis. L will play familiar classical pieces as well. That show also starts at 6 p.m.

On Oct. 26, at 8 p.m., ensemble THE K will be performing classical music in the underground club WestBridge. Club kids looking to dance to techno beats will be surprised to hear instrumental renditions of classic songs such as “You Raise Me Up,” “Moon River,” and “Besame mucho.”

“We collaborated with Hongdae Club Day organizers and decided to add these clubs so that regular club-goers can also have the chance to enjoy classical music in a familiar place,” said Lee Chang-gi, CEO of the Mapo Cultural Foundation. 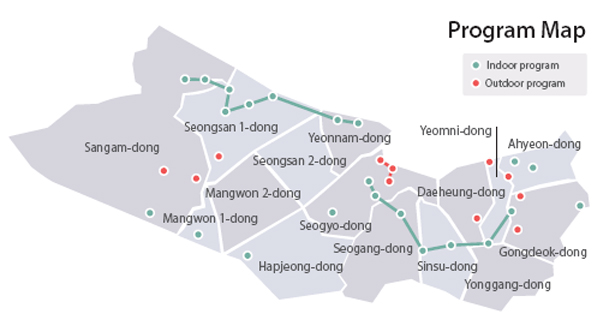 Foreigners staying in the guest houses that will be turned into concert venues during the festival will be able to enjoy the event up close and personal. On Sept. 29, Park Avenue Guesthouse in Yeonnam-dong will turn into a concert hall at 7 p.m. In a show titled “Romantic Fantasy,” soprano Shin Mo-ran will be accompanied by clarinetist Gwoak Woong-sik, flutist Lee Joon-seo and pianist Im Hee-won, and perform familiar classical masterpieces including Schumann’s “O mio bambino caro,” “Nella Fantasia,” among others.

Other programs will be held outdoors at places as diverse as the Gyeongui Line Forest Park, the Ahyeon Market and Sansung Church. There will be an open-air opera of G. Donizetti’s “L’elisir d’amore,” or “The Elixir of Love” at the Sangam Worldcup Park’s Waterside Stage on Sept. 14 and 15 starting at 7:30 p.m. For more information about the program, visit the festival’s website at www.m-pat.kr.