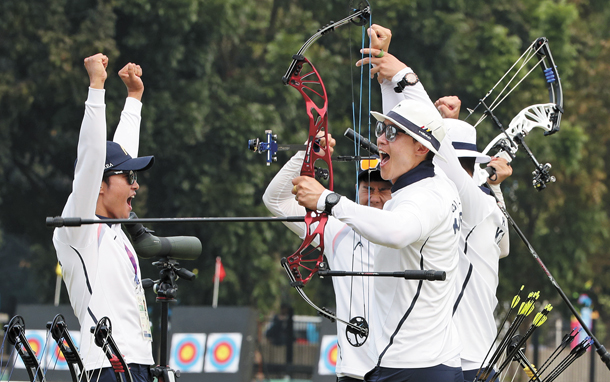 The men’s individual recurve archery final at the 2018 Asian Games on Tuesday should have been a cause for celebration.

Korea was guaranteed to win both the gold and silver medals in the contest between world No. 1 Kim Woo-jin and Youth Olympic gold medalist Lee Woo-seok.

But when Kim defeated Lee by six sets to four, things took an unusual turn.

Kim didn’t celebrate his win, and refused to wave the Korean flag offered by a teammate. By taking gold, Kim maintained his spot as world No. 1, but he also took away Lee’s final chance at an early discharge from the military.

Korean male athletes who win an Asian Games gold or any Olympic medal receive an exemption from their mandatory military service. Athletes like Lee, who already started his military service, are eligible for an immediate discharge.

Kim said he was only focused on doing his best to win gold.

“Whether it was the military situation or anything else not related to the competition, I wasn’t thinking about that,” Kim said. “It was just tough to beat someone that I know so well after months of training together.”

Lee, who isn’t due to be discharged until September 2019, will return to the military after the Games.

“I am disappointed with the result, but I have to accept these results because they’re all my own doing,” Lee said. “And the military isn’t all that bad. All Korean men have to go, anyway. I’ll go back and serve the country the best I can.”

This isn’t the first time for an athlete to lose out on a service exemption at the Asian Games this year.

The men’s individual sabre fencing final between Gu Bon-gil and Oh Sang-uk was similar. Gu, who already had an exemption, defeated Oh, who was looking for one, for the gold medal.

Afterward, Gu said that he felt guilty about robbing Oh of the exemption.

Oh, however, had a second chance in the team sabre event after the individual final, and he managed to win gold and claim his exemption there. Tuesday’s archery final was Lee’s last chance.

Following Kim’s win, Korea added another gold in archery, winning the women’s team compound event for its second medal in the discipline. The team of So Chae-won, Choi Bo-min and Song Yun-soo defeated India 231-228 at GBK Archery Field.

Earlier in the day, Kang Chae-young won bronze in the women’s individual recurve event to take her second medal of the competition.

Kang defeated Lei Chien-ying of Taiwan by the set score of 6-4 in the bronze medal match at GBK Archery Field. Kang won the team gold medal on Monday with Chang Hye-jin and Lee Eun-gyeong.

In the very last archery event at GBK Archery Field, the team made up of Kim Jong-ho, Choi Yong-hee and Hong Sung-ho defeated India in a shoot-off for Korea’s fourth archery title in Jakarta.

Korea wrapped up the archery portion of the Asian Games with four golds, three silvers and one bronze, well short of its goal of winning every medal.