A job seeker looks through openings at a start-up fair for women at the Incheon Samsan World Gymnasium in Incheon on Tuesday. [YONHAP]

The Moon Jae-in government plans to spend a record amount to create jobs as its income-led growth policy is attacked for killing them.

According to the Ministry of Economy and Finance on Tuesday, next year’s jobs-related budget has been set at 23.5 trillion won ($21.2 billion), a 22 percent increase from this year’s 19.2 trillion won, which was a record amount of spending on jobs.

The overall budget is 9.7 percent higher than this year’s, a record 470.5 trillion won.

“The jobs-related budget was increased 22 percent with focus on creating direct jobs for those in vulnerable situations like the elderly, women and people with disabilities,” Finance Minister Kim Dong-yeon said Tuesday during the announcement of the 2019 budget in Seoul. “We are spending more on establishing the conditions for creating jobs indirectly such as expanding and extending unemployment paychecks, job training and helping middle-aged people get new jobs. 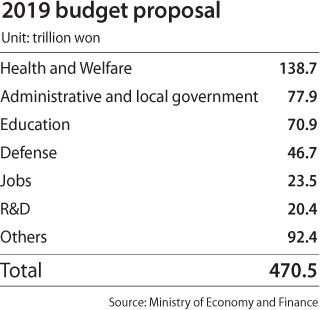 “Recently we have been focusing more on creating more job opportunities in social services and on the budgets for innovative growth and related industries as well as research and development spending on small and medium-sized enterprises (SME), which will greatly contribute to creating more jobs.”

The government increased its budget for encouraging job opportunities in the private sector.

Additionally, the government has increased the budget to give subsidies to SMEs that hire people under the age of 35. A company can get as much as 9 million won a year for each new hire.

The government is expanding jobs in social services offered by the public sector, such as day care, as well as upgrading contract workers to the regular payroll, which gives them benefits such as health insurance and employment insurance.

The only area that is seeing a decline was infrastructure projects, also known as social overhead capital, or SOC. The government cut the SOC budget 2.3 percent to 18.5 trillion won. If the government budget is approved by the National Assembly, it will be the fourth year in a row that the SOC budget has been downsized.

The Moon government began in May 2017 with a vow to focus on creating quality jobs with better pay, especially for the young and those in lower income brackets. It said their spending would boost demand and ultimately supply, establishing sustainable yet balanced economic growth.

Since 2017, the government has planned spending of 51 trillion won, including two supplementary budgets, one last year and another earlier this year, hoping to turn around the job market situation.

Instead, its policies - particularly a steep increase in the minimum wage - seem to have killed jobs. The latest job report said that only 5,000 jobs were added in July compared to around 300,000 in most months last year.

“We reflected the amount needed in encouraging jobs in the private sector, the basic pension, disability pensions and childcare support as well as support for small business owners, [which all are] for income-led growth in next year’s budget,” Moon said.

He stressed that economic recovery is the government’s mission.