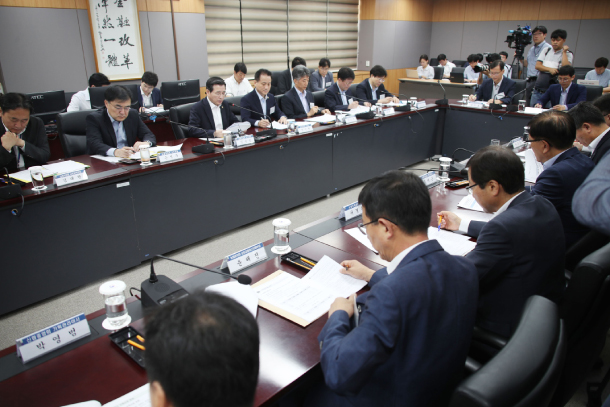 Vice Chairman Kim Yong-beom of the Financial Services Commission, third from left, speaks during a meeting on Tuesday designed to deal with the household debt issue at the central government complex in central Seoul. [YONHAP]

The financial authorities launched a strengthened on-site inspection of household loans this week in a move that coordinates with the government’s bid to rein in the housing market and growing household debt.

The Financial Supervisory Service (FSS), the country’s financial watchdog, will probe banks to look into whether lenders comply with the tougher lending criteria introduced last year.

Yoon Suk-heun, head of the FSS, ordered inspectors to throw the book at any attempt to unfairly offer loans.

“The growth rate in household debts has slowed recently,” Yoon said. “But mortgage lending and loans for landlords show no sign of declining.”

His comment came after multiple reports that major banks provide a larger amount of loans to borrowers by nudging them into using other family members as a borrower to skirt lending regulations.

The Financial Services Commission introduced more stringent lending rules last year as it lowered the maximum loan-to-value and debt-to-income ratios in speculative regions. The ratios were between 40 percent and 70 percent based on the type of property and loan maturity dates. The government cut them to 40 percent.

The lower the ratios are, the smaller the maximum loans available to applicants.

Kim Yong-beom, vice chairman of the Financial Services Commission, also demanded that lenders be in line with current lending rules.

“As for mortgage loans, the inspection will see if the loans are made in accordance with the rules and the stated purpose,” he said.

The move appears to be in line with the government’s efforts to temper overheated housing markets.

The Finance Ministry designated four regions in Seoul - Jongno, Jung, Dongdaemun and Dongjak Districts - as “speculative” zones to bring them under closer scrutiny.