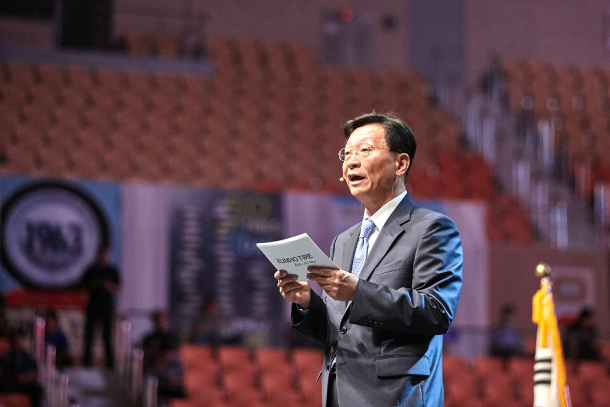 It is the first company event since the Chinese tire maker completed its acquisition of Kumho Tire on July 6.

The event was attended by some 4,000 employees and executives from both companies including Doublestar Chairman Chai Yongsen and Kumho Tire CEO Kim Jong-ho.

Kim said its vision is becoming a “credible brand” which can be interpreted as a “happy workplace” for employees, a “credible product” for consumers and a “long-term partner” for its contractors.

Doublestar Chairman Chai emphasized a credible relationship among shareholders, management and employees as a crucial factor behind building a healthy company.

“Without the credibility, it will only result in pain within the company and profit for our competitors,” Chai said. “Doublestar will preemptively strive to build credible relationships so Kumho Tire can reach further and make tangible outcomes.”

Chai again committed to the independent management of Kumho Tire, regardless of Doublestar’s role as its largest shareholder.

“Last month when Doublestar completed the acquisition, normalizing the management at Kumho Tire was so urgent that we weren’t able to hold a ceremonial event,” Kumho Tire said in a written statement.