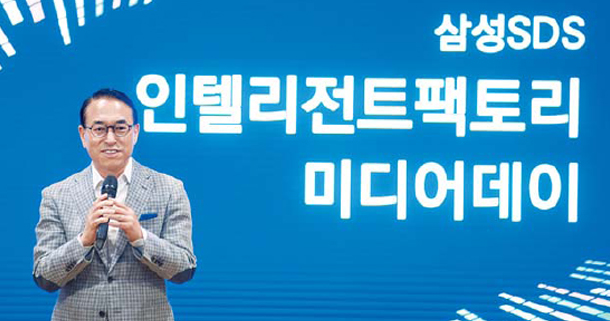 Samsung’s IT service unit plans to upgrade the platform to help companies design and build new plants on top of optimizing production at existing facilities, according to Lee Jae-cheol, leader of the company’s smart factory business division. It wants to attract non-Samsung customers.

“Traditional manufacturing is facing heavy competition, and using new technologies like AI and big data is the only way to make a breakthrough,” Lee said. “We will actively pursue non-Samsung customers based on our platform, which has proven to be effective through operations at Samsung affiliates.”

Samsung SDS has already used Nexplant at over 300 factories in 15 countries operated by affiliates Samsung Electronics and Samsung Display as well as a number of other customers including Hyundai Mobis, Posco and Amorepacific. The factories saw a 30 percent improvement in process quality, 32 percent increase in spotting faulty products and 90 percent cut in time used finding the cause of machine malfunctions, according to the IT service company.

After terabytes of data are collected from each factory through IoT sensors, Nexplant uses AI and big data analytics to tell factory managers when to inspect machines to prevent malfunctions. It uses deep learning technology to spot faulty products. The platform also helps logistics robots that deliver parts around facilities to plan optimized transport routes so they don’t collide with other robots.

“About 5,000 to as many as 20,000 machines are used in each factory, and it has become impossible for engineers to manually oversee the whole operation,” said Joseph Ahn, leader of the platform team at Samsung SDS. “Using our platform can help factories run efficiently on their own without much involvement of human engineers.”

As for upgrading the platform for the designing and construction of new factories, Lee said the company has been preparing for the upgrade for two years. Planning the location of production lines and machines and where to embed sensors prior to building a plant will greatly improve production quality, according to Lee.

Samsung SDS CEO Hong Won-pyo said the smart factory business will be one of four key businesses under its IT service business - along with finance, cloud and enterprise solutions - considering the growing demand for smart factory software in the manufacturing industry. IT service already accounts for 55 percent of the company’s earnings. The remaining 45 percent comes from logistics outsourcing.

Samsung SDS is not the only IT service company in the business. The IT service units of SK and LG Group - SK C&C and LG CNS - are also competing with customers with their own smart factory platforms.