Everything her bike touches turns to gold

Everything her bike touches turns to gold 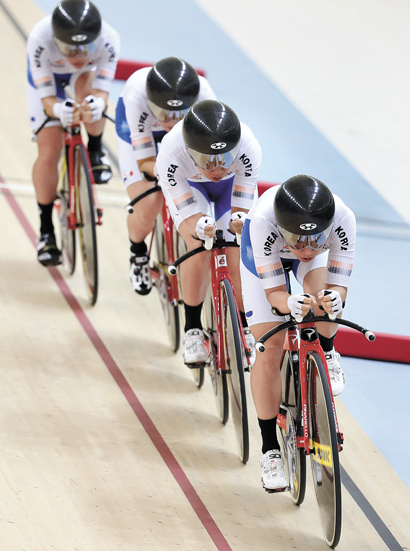 Going into the 2018 Asian Games, expectations were high that female archer Chang Hye-jin would win the most gold medals for Team Korea. Instead it’s cyclist Na Ah-reum that has raked in the most golds this year.

With her victory in the women’s team pursuit race at the Jakarta International Velodrome on Tuesday, Na became the first Korean athlete to win three gold medals at the 2018 Asian Games Jakarta Palembang.

The women’s team of Na, Kim You-ri, Kim Hyun-ji and Lee Ju-mi defeated China in the final for gold, an improvement on their silver at the 2014 Asiad in Incheon.

Na, who started cycling in sixth grade, has been dominating the sport since middle school. In 2008, at the age of 18, Na burst onto the international scene, winning five titles at the 2008 Asian Junior Cycling Championships.

Her success continued as she moved to senior competitions. In the 2010-11 UCI Track Cycling World Ranking, Na finished 17th in the individual points race.

But Na’s career wasn’t all glory. At her first Asian Games in Guangzhou 2010 she injured her cheekbone and lip after falling off the track. At the time, Na was in second but was knocked out of the race when the leader of the pack went down. Although she suffered no major injuries, Na had to withdraw from the race and finish with two bronze medals - in individual pursuit and team pursuit.

After a disappointing debut at the Asiad, Na returned with something to prove in 2014. She took home gold in road time trial, silver in team pursuit and a bronze in omnium. Considering Na’s Asiad trajectory, her results this year don’t come as that much of a surprise. Na has won gold in all three races she has competed in so far - road race, individual time trial and women’s team pursuit.

Despite her streak of medals at the Asian Games and other events, Na is still not a household name in Korea, a country where cycling is often overlooked.

“When I see my parents back home, I’ll feel even happier,” Na said. “I heard that I’m the second cyclist [to win three titles] after coach Jang. I’ll work harder and exceed coach Jang’s accomplishments.”

Having to race both on the road and at an indoor track, Na said she has struggled to condition herself. As Na’s first two medals were from road events, she had raced 123.1 kilometers before she even touched an indoor track.

“My teammates that arrived two to three days earlier than I did told me that it’ll get better [physically],” Na said. “I kept on competing only thinking that the more I compete, the better I’ll get.”

Though she has already won three golds, Na is not finished yet. She will compete for a fourth gold medal with teammate Kim You-ri in the women’s madison at 3 p.m. tomorrow. The madison event is a relay race where each team has to complete more laps than any other team. Riders in each team, consisting of two cyclists, alternate during the race.

“I won’t leave any [gold medals] behind when I go back home,” Na said.