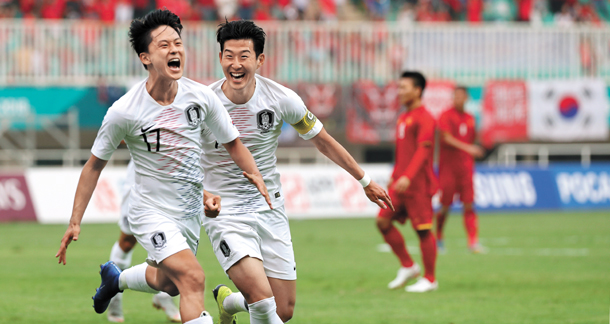 Lee Seung-woo, left, and Son Heung-min celebrate after Lee scores Korea’s first goal during a semifinal match against Vietnam at the 2018 Asian Games at Pakansari Stadium in Indonesia on Wednesday. [YONHAP]

The Korean men’s football team defeated Vietnam 3-1 in the semifinals at the 2018 Asian Games at Pakansari Stadium in Indonesia on Wednesday.

Vietnam finally scored its first goal in the 69th minute but was unable to level the playing field.

Japan and the United Arab Emirates will play their semifinal later tonight. Korea will face the winner in the final at 8.30 p.m. on Saturday.