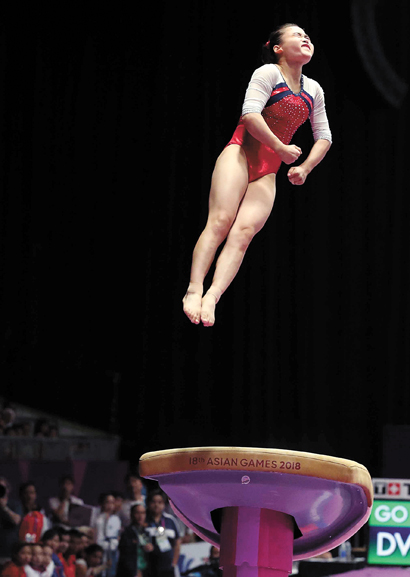 Yeo Seo-jeong performs in the women’s vault final at the Asian Games in Jakarta, Indonesia, on Aug. 23. [NEWS1]

There have been some father-son and mother-son gold medalist duos in Korean athletics history, but until this year, there have never been father-daughter gold medalists.

At just 16 years old, Yeo Seo-jeong received a score of 14.387 to win gold in women’s vault, defeating 43-year-old Oksana Chuovitina of Uzbekistan by 0.1 point. By winning gold, Yeo Seo-jeong is following in her father’s footsteps, and the two are now the first Korean father-daughter duo to win gold at the Asian Games. She is also the first Korean gold medalist in artistic gymnastics in 32 years.

Yeo Seo-jeong’s father, Yeo Hong-chul, is considered one of Korea’s best gymnasts in men’s vault. The elder Yeo won silver at the 1996 Olympics and two gold medals at the 1994 and 1998 Asian Games.

Under the influence of her parents, Yeo Seo-jeong started artistic gymnastics at the age of 8, competing in vault as her main event, just like her father. Her mother also used to be an artistic gymnast.

Standing at 1.5 meters (4-foot-11) and weighing 46 kilograms (101 pounds), Yeo Seo-jeong quickly became a serious contender in Korean gymnastics thanks to her great flexibility. She has dominated domestic events, winning 11 golds throughout her three years in middle school.

After making her senior debut in June, she was quick to make an impression on the international stage, winning gold in vault at the 2018 FIG Artistic Gymnastics World Cup Series in Guimaraes, Portugal.

“Yeo Seo-jeong has talent,” her father said. “She is better in many more areas, so I have high expectations [for her career].”

Although Yeo has now proven that she isn’t only famous because of her father’s name, that hasn’t always been the case. Prior to the Asian Games, she often thought about quitting the sport because of the pressure of living up to her father’s legacy.

“I felt too much pressure from the title of being Yeo Hong-chul’s daughter,” Yeo Seo-jeong said. “But before I left for Jakarta, my parents told me to just enjoy it. Having my dad here with me in Jakarta helped a lot. I’m thankful that he was there for me whenever I was having a hard time.”

Yeo Seo-jeong’s victory was even more memorable for the family because it was her father commentating during the event.

“After the national team qualifiers, Seo-jeong wasn’t in her best condition,” Yeo Hong-chul said. “But watching her perform on a big stage like the Asian Games, I think she’s better than me in actual competition.”

Now that Yeo Seo-jeong has won gold at the Asian Games, she has set her sights on winning gold at the 2020 Tokyo Olympics, the one thing her father never accomplished in his career. During the 1996 Olympics in Atlanta, Yeo Hong-chul just missed the cut for gold after losing points for his shaky landing.

“At the Tokyo Olympics in two years, I want to win gold and put that medal around my dad’s neck,” Yeo Seo-jeong said.