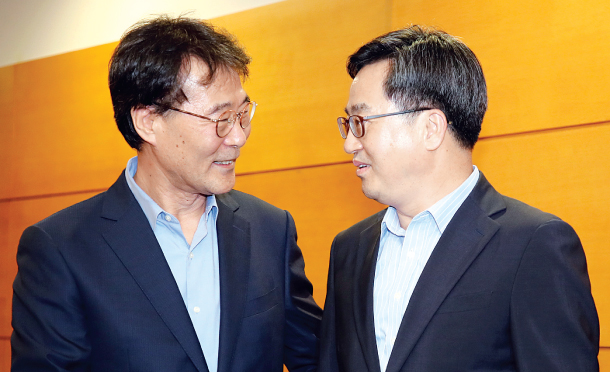 The two economic titans of the Moon Jae-in government - Finance Minister Kim Dong-yeon and Blue House policy director Jang Ha-sung - held a closed-door meeting on Wednesday to find common ground on the policies that have been driving them apart.

“Just today, we have met twice and we’ve been meeting almost every day recently,” said Kim, who is also deputy prime minister for the economy, as he arrived at the closed door meeting in central Seoul on Wednesday. “I don’t see why this is news.”

“We see each other here and there in meetings,” Jang said. “I don’t see what’s the problem.”

Jang even proposed that the two hold hands tightly for a photo shoot.

The Wednesday meeting, held around 5:30 p.m., was believed to focus on President Moon’s recent order to find a legal way to make the government guarantee national pension system payouts in the future. Kim has been cautious about the idea because of its potential implications for public debt.

Currently, three specialized funds - for government employee pensions, military pensions and teachers’ pensions - are guaranteed by the government. Although there was an attempt to give the same legal guarantee for the national pension system in 2012, it was rejected by the finance minister at the time for the same reason.

But Jang on Tuesday argued that the Organisation for Economic Co-operation and Development, when calculating national debt to gross domestic product, does not include national pension payments.

“Compared to advanced economies, there are many more senior citizens that work [in Korea],” Jang said. “That’s because there’s no system that guarantees [the livelihoods] of senior citizens.”

While the government has tried to portray Kim and Jang as being on the same page in regards to economic policies, it was manifest that Kim was less committed than Jang to the administration’s so-called income-led growth policy in a meeting with the ruling party on Aug. 19, two days after a jobs report showed the worst employment situation in eight and half years.

At that meeting, Kim raised the possibility of changing the direction of current economic policies, while Jang asked the public to be patient and trust the government.

Even during a meeting with lawmakers on Monday, Kim said one needs to listen to criticism that the income-led growth policy and a hike in the minimum wage has had a negative impact on jobs.

Yet Jang and Moon have doubled down on pushing forward with the policy. Moon said Wednesday that his government was “changing the economic paradigm” of Asia’s fourth largest economy with its income-led innovative growth policy and initiatives to make a fairer economy, making clear he was committed to his policy line.

“We are now changing the economic paradigm with the income-led, innovative growth policy and fair economy initiative,” said the president during a meeting with heads of state-run institutions in Wonju, Gangwon.