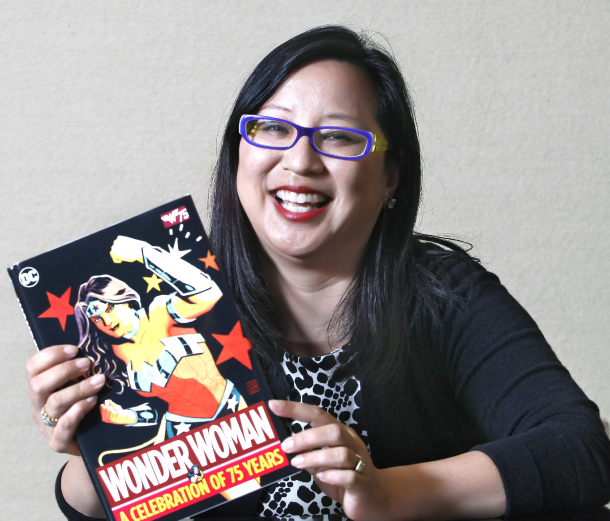 Amy Chu has quite a unique background for a comic book writer. Unlike many of her colleagues, she did not grow up with comics. She did not have a favorite superhero, and she couldn’t differentiate which characters belonged to Marvel or DC Comics. For a comic book writer, Chu has an unconventional academic background - an MBA from Harvard, a bachelor’s in architectural design from Massachusetts Institute of Technology and a BA in East Asian studies from Wellesley.

But her unique background is what helped her stand out in the comics industry. Before breaking into this small field, Chu worked as a management consultant for a multitude of companies, through which she was able to discipline her thoughts - a very crucial part of writing stories, she says.

“Storytelling requires a lot of discipline because writing comics is about distilling the essence of the story,” said Chu on Monday, who visited Seoul to attend the Culture Communication Forum (CCF), an annual event hosted by Corea Image Communication Institute (CICI), a nonprofit that promotes Korean culture overseas. What she did as a consultant - selling ideas, working with people - helped her collaborate, quickly figure out the needs of editors and pitch ideas she believed would get approved.

And although her lack of interest in comic books when she was a child made it more difficult for her to adapt to the industry than it would have been for comic book enthusiasts, it has ultimately helped her out in that she can approach comic book writing as “a business.”

“A lot of people who grew up with their favorite character have trouble tackling that character in a new or a different way. Or sometimes they don’t even want to do the job because they hold that character with such esteem,” said Chu. “For me, it’s more like a business. You have to respect the core of the character, but you can’t keep the character static. That character has to move forward to get new readership. For me, the idea of taking legacy characters and making them appealing to new audiences is very exciting.”

Perhaps, due to her refreshing and creative angle on how she approaches writing stories, Chu has already built a reputation in the industry. It has been three years since she has become a full-time comic book writer, but Chu has already written stories featuring a number of internationally beloved characters such as Wonder Woman from DC Comics and Deadpool and Ant-Man from Marvel.

Also a co-founder of the comic imprint Alpha Girl Comics, Chu endeavors to help other writers - especially women - get opportunities to publish their own comics because the comic book industry is “fairly male-dominated.” The industry is an especially difficult one to break into as many companies require writers to already have been published in order to get more work.

“There’s very little room for new people to enter [the comic book industry],” said Chu. “We need to increase opportunities for more women to get into it.”

The following are edited excerpts from an interview Chu conducted with the Korea JoongAng Daily on Monday.

Q. You have built a reputation in the industry in such a short period of time. Fans praise your comics for instilling a fresh angle to familiar stories. What’s your secret to writing good comics?

A. My rule is to keep it simple. Sometimes people try a whole new different thing in the way a story is told - something we see in almost every creative media, but to limited success. I’m a very conservative person. I’m not going to try to reinvent the media. For me, it’s all about the skills and telling good stories. Readers are used to doing things in certain ways. There’s got to be a certain level of familiarity. If not, there is no guidepost. If I’m doing a science fiction story with a new world, for example, I’ll have a very familiar family structure. We, as ordinary human beings, have to lock on [to] something.

I also always make sure the story has a good ending because what readers remember about the story is the feeling they get at the end, just like a meal. Most people have the beginning in mind when writing a story, but they don’t know how to end. For me, I do the ending first.

Many of the comics you wrote feature women like Poison Ivy and Dejah Thoris. Based on what you write, I’m guessing you’re interested in depicting strong and independent women. What does it mean for you to feature female characters, and how do you hope your depictions influence your readers?

The Me Too movement has encouraged many women to speak out about their experiences. How has the movement affected the comic book industry?

We’re still in the middle of this right now. There have always been women who entered the comics industry, but did not hang around for long because [the environment] is not very encouraging for women. But things have changed radically over the last five years. I don’t think this is specific to the Me Too movement, but the industry has seen a lot more women being hired as editors. The senior editors are still almost always males, but women are increasingly in positions to hire.

The thing I always felt uncomfortable about while reading comics was the costumes that female characters wore. They’re often in very revealing clothing and use their physical charms to achieve their goals. I’m afraid that promoting image of strong and independent female characters with unrealistic beauty standards could aggravate the social pressure for women to be perfect, and the public’s perception on how a woman should be.

This is very important. In fact, this is what’s changing. Now that the editors are increasingly women, they are starting to have the control over that. Another problem is that many artists have been trained to draw in that style. They draw in a way that they think would sell, but things have changed over the last five years. It seems that Marvel has realized that when they don’t draw women like that, a lot of their titles sell better because women are now reading comics.

I feel very strongly about this. That market is tapped out. There’s no growth for continuing on with that strategy.

The only way you get new readership is by appealing to women. There’s a reason “Captain Marvel” movie is being made. People [from the industry] are increasingly hiring more women to draw because there has been pushback from not just female fans, but also male fans [who] are tired of it. There’s been a greater level of awareness, and there’s definitely a much greater diversity of art styles now.

Racial representation is another issue to be discussed. We hardly see any Asian superheroes. Even when we do, they’re either a nerdy sidekick or a character with exceptional martial arts skills. We have seen Chinese Superman Kenan Kong and Korean American Hulk Amadeus Cho, but to a very limited number. What are your thoughts on this issue as a Chinese American?

This gets to who’s creating the content. All the characters you mentioned, they were created by Asian American writers. For my scripts, I try to add Asian characters wherever I can. This is something that I consciously do as an Asian American. In my story for Poison Ivy, for example, her mentor is Phillipina. If it were given to another [non-Asian] writer, the person wouldn’t have thought about that. And the good thing is that nobody is going to tell me “no.” It’s not the same as Hollywood, where there’s a lot of control over that kind of thing. But for comics, I can do whatever I want, which is another reason I like writing comics.