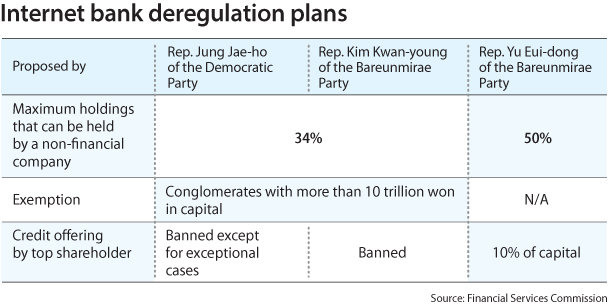 Legislation to deregulate internet banks hangs in the balance after lawmakers failed to agree on the fine details.

The ruling and opposition parties agreed in principle to increase the amount of shares that a non-financial company can hold in an internet bank, but further negotiations have stalled.

At the center of the controversy is whether conglomerates will be permitted to increase their stakes in internet banks.

The Financial Services Commission, the country’s financial regulator, and the governing Democratic Party suggested that a family-owned group with more than 10 trillion won ($9 billion) in capital should not be included in the bill because of concerns over the excessive dominance of big corporations.

“It is important to take into consideration fair competition and the public concern surrounding conglomerates when we discuss deregulation,” Choi Jong-ku, chairman of the Financial Services Commission, told lawmakers during a meeting at the National Assembly on Monday, “so it is appropriate to stipulate that large companies of a certain size should be excluded from the relaxed rule.”

The main opposition Liberty Korea Party, however, believes conglomerates should be included in the deregulation drive.

“It doesn’t make sense that one company is allowed and the other is not,” said Rep. Kim Yong-tae of the Liberty Korea Party. “Instead, the rule should collectively review whether a company is permitted to become the top shareholder of an internet bank.”

The ruling and opposition parties also clashed over the maximum amount of shares that a non-financial company can hold in an internet-only bank. The majority of the ruling party believes it should be a 34 percent stake, while many in the opposition party are in favor of 50 percent.

Currently, a non-financial company can hold shares worth up to 10 percent of a company, but can only vote with 4 percent of them.

Since lawmakers fail to see eye to eye, the chance of a deregulation bill actually passing this month are increasingly slim, despite President Moon Jae-in calling for the change earlier in August.

Analysts expect the legislation to pass, but later than expected.

“Since the party members disagree on the target of the bill, as well as the specific amount of shares, the possibility of it being passed this month are slim,” said Kim Min-jeong, an analyst at Hi Investment & Securities. “The Democratic Party appears to be aiming for September to pass the bill.”

Lee Min-a at KTB Investment & Securities echoed Kim’s view. “Both the ruling and opposition parties broadly acknowledge the need for the proposal to be passed,” Lee said. “Even if the bill fails to find its way to the National Assembly soon, the drive for deregulation will remain alive.”