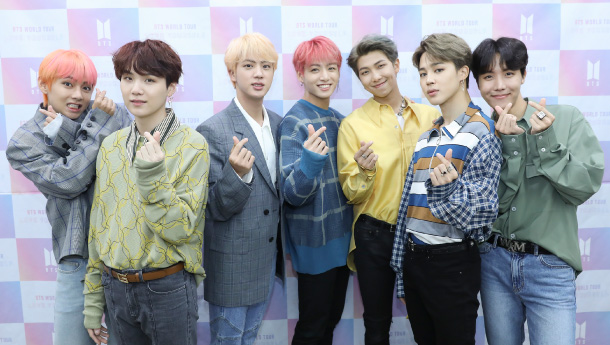 BTS, the first Korean act to top the Billboard album chart, is likely to set a new record. As many as 1.5 million copies of their new album “Love Yourself: Answer” have been reserved before the album’s release worldwide. The music video for “Idol” was posted on YouTube at 9 p.m. on Aug. 24 and already has over 900 million views. The 790,000 tickets available for the group’s world tour sold out as soon as they were released.

It is not the first time that Korean musicians have ranked high on the Billboard chart. In 1962, the Kim Sisters’ remake of Charlie Brown came in at seventh on the Billboard singles chart. The Kim Sisters consisted of Kim Suk-ja and Kim Ae-ja, daughters of Korean singer Lee Nan-young, along with Kim Min-ja, Lee’s niece. They started their career as entertainers at U.S. army bases and were picked up by an American producer, who brought them to Las Vegas in 1959. The record was not broken for 50 years, until Psy’s “Gangnam Style” reached second place on the chart.

The Kim Sisters started the Korea syndrome and Psy became an international pop star, but BTS is far more influential. For 58 straight weeks since July 2017, BTS has been at the top of the Billboard Social 50 chart, which is based on social media fans and streaming. BTS has die-hard social media fans from all over the world. And their popularity is not limited to the young generation. There are countless videos on YouTube showing teens around the world getting a BTS concert ticket as a surprise gift and shedding tears of joy. The parents who record and post the videos also become fans.

It is great news for the Korean economy that BTS, the kings of the social media generation, are pushing the limit with a new album. The Korean wave also promotes Korean products. There is a study that suggested the economic impact of BTS is estimated to be over 1 trillion won ($0.9 billion). For culture and the economy, BTS is precious, and I hope to see other musicians continue their success.

However, I noticed that 6.4 billion won was allocated to overseas promotion of popular culture in the recently announced budget plan for next year. The goal seems to be nurturing a successor to BTS. If popular culture was not left alone but instead determined by the government, would BTS have ever been so successful?

Of course assistance is helpful, but the government should not intervene with the process of training and promoting pop stars.