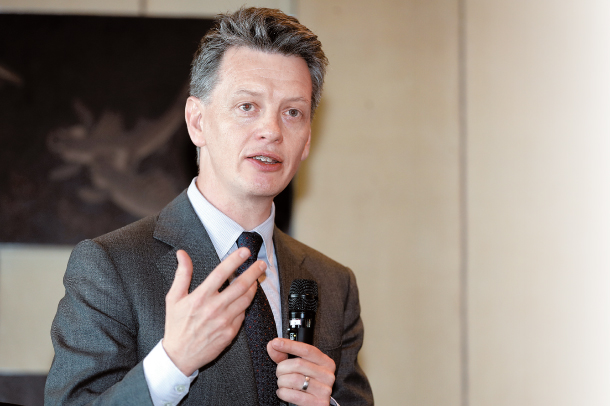 The ride-hailing company is working to revitalize its local business and focus on its taxi and food delivery services, he said.

“If we look back, we haven’t always behaved in the right way, and that is the case in Korea as well,” Harford said at a discussion attended by members of the American Chamber of Commerce in Korea. “As a company, we want to apologize for that.”

Following his apology, Harford said that Uber would strive to become a better partner for cities and countries that host its services, hinting that the company wants to start fresh.

“I want to be clear that going forward, we will not launch products or services that do not comply with regulatory frameworks in Korea,” he said.

Uber has been plagued for more than a year by a series of high-profile scandals involving its unrestrained office culture and lawsuits that led to a company-wide reshuffle, including the replacement of its CEO and COO. Harford, who has an MBA from Insead, served as Asia-Pacific president at Expedia from 2004 to 2006 and took the CEO post at Orbitz in 2009.

Orbitz was then sold to Expedia in 2015, and Uber’s new CEO, Dara Khosrowshahi, the former CEO of Expedia, asked Harford to join the company as his right-hand man.

Harford took over the job last December. His visit to Seoul on Wednesday was his first since he joined Uber. 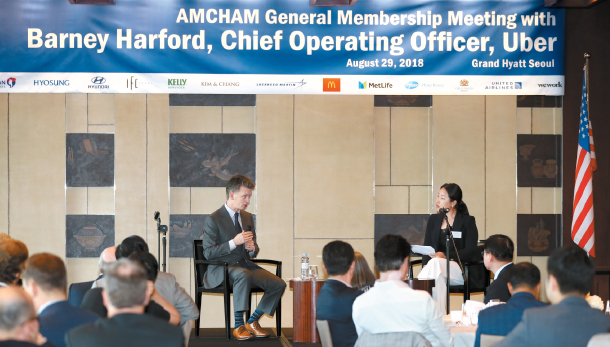 Uber Chief Operating Officer Barney Harford, left, speaks during a discussion moderated by Seo Ji-eun, a reporter from the Korea JoongAng Daily, right, at a general membership meeting of the American Chamber of Commerce in Korea at the Grand Hyatt Hotel in central Seoul on Wednesday. [YONHAP]

Uber first came to Korea in 2013. Its most popular ride-hailing service, UberX, was banned in 2015 after the company’s peer-to-peer ride-hailing model was declared illegal by Korean transportation authorities. The service also faced intense protests from taxi drivers who were afraid of losing their income to Uber.

Uber has since remained low-profile here, merely operating Uber Black, a premium cab-hailing service; Seoul Taxi, which works in the same way as Kakao Taxi; and car rental services such as Uber Trip and Uber Assist.

In the meantime, Kakao Taxi, modeled after Uber and run by Kakao, operator of the country’s most popular chat app, has captured more than 90 percent of Korea’s taxi-hailing market. In August last year, Uber introduced its food delivery service UberEats, but it is only available in limited areas within Seoul.

Harford said he still believes there are ways to use Uber to enhance existing taxi operations. He gave the example of UberFlash in Singapore, which Uber launched earlier this year in partnership with the country’s largest taxi company. The service, before it was sold, allowed customers to get a ride from either a taxi or an Uber depending on which was closer.

Although the service is no longer available, since Uber sold its Southeast Asian operation to rival Grab, Harford said the partnership was “totally focused on increasing earning opportunities for the taxi drivers in Singapore.”

Regardless of its minor presence in Korea, Uber has been expanding its Korean workforce in the past several years in hopes of grabbing more of the Korean market. The Uber COO called Korea “an incredibly important market” for the company because of its economy’s size and high level of technology.

Harford said Uber is currently looking for partnerships and new opportunities in Korea.

The COO arrived in Seoul on Tuesday night and had a meeting early Wednesday morning with several executives from unnamed Korean technology companies to search for potential “partnership opportunities.”

“I think there is potential for us to work closely with some of the greatest technology companies in Korea,” Harford said. “The partnership will help us take Korean technologies and integrate them into some of the work that we are doing.”

Uber recently announced it would diversify into electric bike and scooter services for short trips as a way to ramp up its global business. The company added electric bikes to its app in some cities in the United States.

Earlier this year, it acquired bike-sharing company Jump and also invested in Lime, an electric scooter firm. However, Harford did not offer a specific timeline for rolling out new services in Korea.

“It’s what got us started, but we see ourselves as a company that is about the transportation of people and of things,” Harford said. “There are many ways we are pushing forward in terms of urban transportation.”