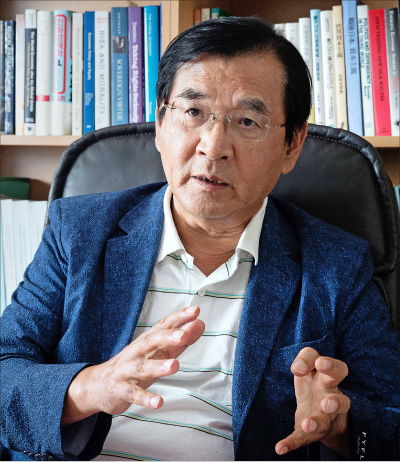 With the Moon Jae-in administration’s income-led growth policies at the center of a national debate amid growing concerns about an economic slump, a scholar with ties to both the liberal and conservative administrations weighed in — and he had few kind words to say about the president’s plans.

Kim Dae-hwan is unique among Korean bureaucrats, as he served both in the liberal Roh Moo-hyun administration as labor minister for two years as well as the conservative Park Geun-hye government for three years as the head of the Economic and Social Development Commission. This presidential commission oversees disputes between laborers, employers and the government.

Well known for his resolute character and distaste for political concerns when arguing for his beliefs, Kim often clashed with former President Roh as labor minister and said he was ready to quit the post at any time.

An economist with a Ph.D. from Oxford, Kim was one of the leading voices in progressive academic circles in the 1980s. His 1984 revised translation of the Dobb-Sweezy debate was widely read among progressives at the time, and subsequently banned by the authoritarian Chun Doo Hwan government.

Many progressives, however, ended up panning his term as labor minister and in the presidential commission, during which he made many decisions that angered laborers for the sake of promoting growth.

The JoongAng Ilbo interviewed Kim on Aug. 22 at his private study in southern Seoul.
Below are edited excerpts from the interview.

Q. How do you view the current government’s income-led growth policy?

A. Income-led growth is a mere tautology that equates rising incomes with growth. Logically, it makes no sense. The only theoretical basis behind it is that since low-income classes have a higher marginal propensity to consume, raising their income will lead to growth in the domestic market. But even this idea has flaws. Even if those in a low-income bracket spend more, most of what they consume are essential goods, which are usually imported. Even if some growth takes place, there will only be marginal results. They should just say that their purpose is to improve income distribution. Growth, as defined in business cycle theory textbooks, is primarily led by investment in businesses.

The government said it will not relent on its income-led growth policy. It has said that the raised minimum wage is only part of a larger economic package designed to foster growth. Tell us your views on this.

The words “income-led growth” are very attractive. It conveys a fairy-tale notion that one’s income will suddenly rise. It will be difficult for this administration to abandon such a great catchphrase. What it can do, however, is to change the content of this policy. Concerns about income polarization have long been pervasive among the public. It would be a clearer choice if the government were to clarify that it will work to improve income distribution and work to find and support new sources of growth in the long-run. But interfering in the economy directly with measures like the minimum wage hike is bound to lead to issues. Only the market, not the government or computerized data, can determine optimum price levels. Of course, the market’s price determination mechanism may not always be fair.

This administration, however, appears to believe too much in the government’s role in the economy. Blue House chief economic adviser Jang Ha-sung was quoted as saying the income gap, not wealth, was the source of social inequality in a book published last year. If the Blue House is trapped by this mistaken idea, which I believe was meant to buttress the administration’s income-led growth policy, then I’m afraid that the government’s interference in the market will only increase going forward.

Is there any way to minimize the impact of the additional 10.9 percent hike in the minimum wage scheduled for next year?

The government has put out a plan to help the self-employed, but such fiscal policies can only be temporary measures. In the past, the minimum wage also rose by double digits, but the negative impact was much less then. This was because there was a period of adjustment before and after the wage rose that allowed for the market to fine-tune itself in response. It may be politically inconvenient to do so, but the government must ensure next time that it provides signals to the market that changes are coming. Only then can the self-employed prepare themselves and survive the changes. Small business owners must also be included in the Minimum Wage Commission to lend a voice to their decisions. The minimum wage must also be legally differentiated according to different industries and regions to account for economic differences.

You’ve criticized the government’s labor policies, saying the Blue House has set up a cartel with labor unions. Tell us more about that.
I don’t think the president understands the situation at the moment. He will need to make a decision at some point, but I don’t think he will be able to do so. The voices of major union members are reflected in policy, but the vast majority do not have their voices heard.

I don’t think the president understands the situation at the moment. He will need to make a decision at some point, but I don’t think he will be able to do so. The voices of major union members are reflected in policy, but the vast majority do not have their voices heard.


Do you agree with the administration’s plans to continue pursuing converting contract workers to regular workers to reduce the negative effects of the dual industrial structure on the labor market?

The process must be undertaken gradually and naturally. If discrimination between the two types of workers is reduced, then the market will naturally want to hire regular workers rather than non-regular ones. In the end, the market is important.

You’ve argued for the dissolution of chaebol in your 1999 book “Reform of Korea’s Chaebol,“ which you co-authored with other scholars. Tell us more about that.

The point is not the dissolution of the chaebol but the dissolution of the chaebol system. We pointed out the problems with a corporate governance structure in which a company’s headquarters makes commands but does not take responsibility for its decisions. It is true that we supported a professional management structure over an owner-run system. But now, after witnessing flaws with professional managers that favor short-term gains, I have come to understand the benefits of owner-based management, which is able to make decisions based on long-term objectives. My experience as an outside director at LG helped foster these beliefs.


You’ve criticized the so-called 86 generation, or the generation of former student activists who studied in the ’80s and were born in the ’60s. They have held enormous political and social clout following Korea’s democratization in 1987. Why are they a problem?

The 86 generation is too accustomed to judging reality based on a rigid ideological framework. Reality is highly complex and nuanced. Today’s justice may be tomorrow’s injustice. We must never be lax about trying to assess reality. It is never correct to try to objectively view reality based on a few notions and ideas. There must always be an intellectual process in which the reality is organized into abstract ideas and vice versa. This unending exercise is what truly defines progress and development.

Would you say you are progressive or conservative?

Are all of those who talk about the market conservative and all those who talk about redistribution progressive? I believe we must view the world with a wide lens. I have never called myself a progressive. The greatest teacher in life is reality. I am merely a realist who disdains dichotomized classifications like left and right.