U.S. ratchets up pressure on Pyongyang with military drill card

U.S. ratchets up pressure on Pyongyang with military drill card 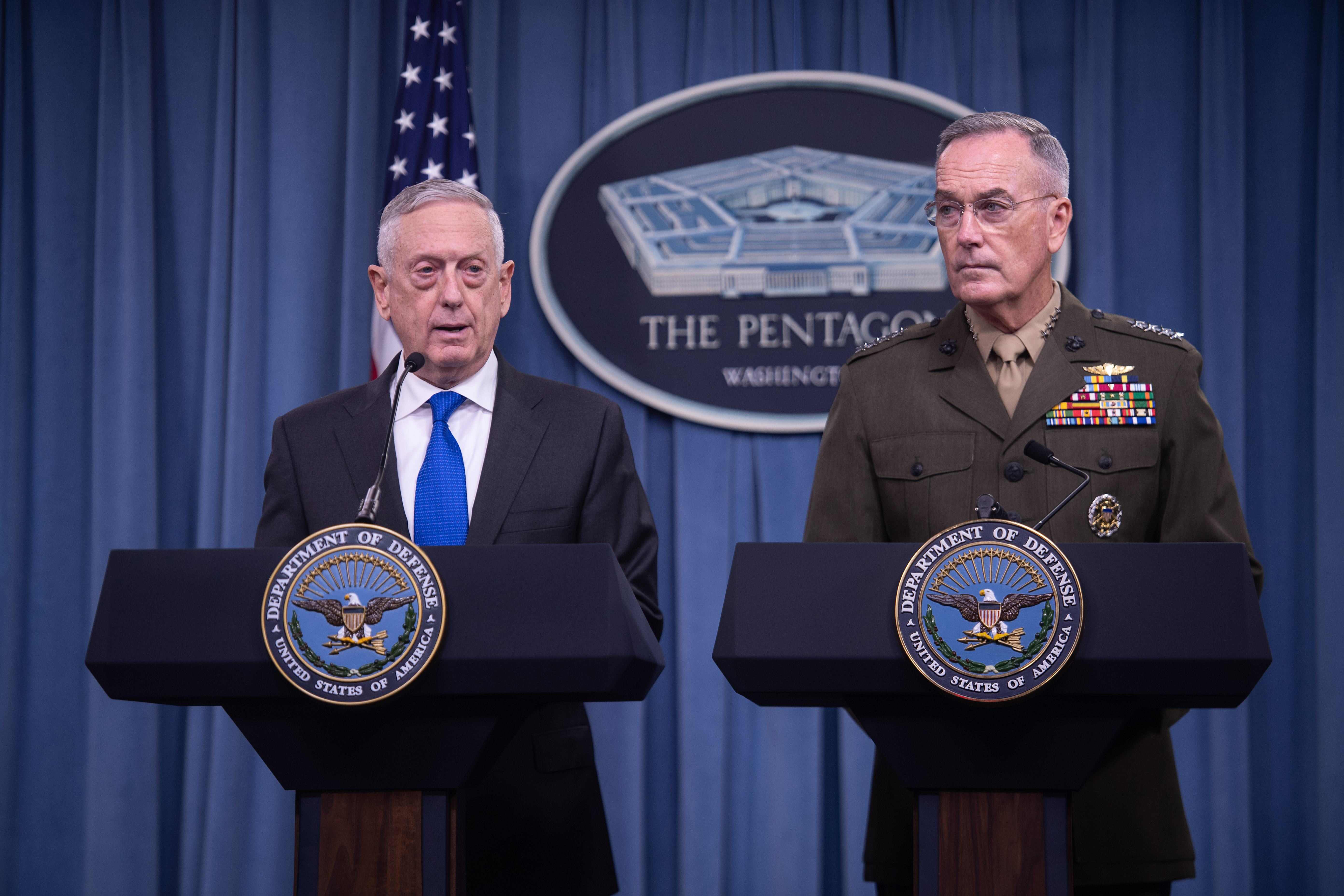 U.S. Defense Secretary Jim Mattis, left, and chairman of the Joint Chiefs of Staff Gen. Joseph Dunford hold a press conference at the Pentagon in Washington, DC, on Tuesday. AFP/YONHAP

Washington has no plans to suspend any more joint military exercises with Seoul, U.S. Defense Secretary James Mattis said Tuesday, after negotiations with Pyongyang to dismantle its nuclear and ballistic missile programs hit an impasse.

“As you know, we took the step to suspend several of the largest exercises as a good-faith measure coming out of the Singapore summit,” said Mattis at his first press conference in five months on Tuesday at the Pentagon, alongside U.S. Joint Chiefs of Staff Gen. Joseph Dunford. “We have no plans at this time to suspend any more exercises.”

The defense chief’s remarks suggest the United States will resume large-scale joint military exercises with South Korea, which were shelved to help nuclear negotiations with the North make progress. It could also be a strategy to ratchet up pressure on the North following U.S. President Donald Trump’s abrupt cancellation last week of Secretary of State Mike Pompeo’s fourth trip to Pyongyang.
Mattis added he will “work very closely” with Pompeo on the issue but added that “at this time, there is no discussion about further suspensions.”

North Korea has long denounced joint military drills between Seoul and Washington as rehearsals for invasion, though the allies have refuted such accusations and stressed the exercises’ defensive nature.

In early January, South Korean President Moon Jae-in and U.S. President Donald Trump agreed to delay their regular joint military exercises during the PyeongChang Winter Olympics in February, leading to a period of détente after high military tensions. The Foal Eagle and Key Resolve joint exercises were postponed till after the Olympic and Paralympic Games, and resumed in early April but did not involve U.S. strategic assets. During this period, the North also refrained from nuclear and missile provocations.

After his summit with North Korean leader Kim Jong-un on June 12 in Singapore. Trump abruptly declared in a press conference that he would stop the “war games” held between the United States and South Korea, calling them expensive and provocative. This was something that was not outlined in the text of the June 12 North-U.S. joint agreement, and the Pentagon in days afterward scrambled to define the scope of the suspension declared by Trump. In interviews afterward, Trump said the joint exercises would not be held as long North Korea was “negotiating in good faith” with the United States.

On June 19, South Korea and the United States agreed to suspend a major joint military exercise, the Freedom Guardian, scheduled for August, and later Seoul canceled its Ulchi exercise, which runs in tandem with Freedom Guardian.

Mattis’s remarks indicate that joint exercises normally done in the winter and early in the calendar year may go on as usual.
When asked to clarify whether joint military exercises scheduled for next year, including Foal Eagle, will take place, Mattis simply replied, “We have not made decisions on that at this time.”

Mattis further clarified, “We suspended several of the largest exercises but we did not suspend the rest.” He added that there are “ongoing exercises all the time” on the Korean Peninsula but “North Korea could not in any way misinterpret those as somehow breaking faith with the negotiation.”

He said, “So the exercises continue. What it means in practical terms is that we're making no changes to the exercise program at this time.”

It is possible that the next major joint drill could be the Vigilant Ace, a large-scale South Korea-U.S. aerial exercise which usually takes place between October and December. Last year, the five-day Vigilant Ace drill took place in early December, days after the North test launched an intercontinental ballistic missile (ICBM) capable of reaching the mainland United States.

The massive drill involved 230 aircraft, including F-22 Raptor stealth fighters and F-35As fighters and some 12,000 military personnel. They were the largest aerial drills to date and also the first time six F-22 Raptors were simultaneously deployed for an exercise on the peninsula. The joint drill was condemned strongly by Pyongyang, which called it provocative and a ploy to destroy the North.

However, Mattis, when asked for the Pentagon’s assessment of Trump’s declaration over Twitter that there is “no longer a nuclear threat from North Korea,” replied that, “The bottom line is, there was progress made” by the two leaders sitting down for talks. He added that Washington knew clearly that the nuclear negotiations were going to be “a long and challenging effort.”

Pointing out that the 1950-53 Korean War “has never ended,” Mattis said the U.S. will stick with a “diplomatically-led process,” adding that his job “is to support the diplomats,” a stance he has consistently maintained.

He did not comment on whether he has seen any attempts by the North to denuclearize, referring the question to the State Department.
Dunford said at the press conference that Washington’s “priority in the Indo-Pacific Command is supporting the State Department-led diplomatic and economic efforts aimed at denuclearization of the Korean Peninsula,” where 28,000 U.S. military personnel are stationed, and to demonstrate its “commitment to the alliance and deterring North Korean aggression.”

He added that his forces are conducting air and maritime operations “to disrupt ship-to-ship transfers of fuel in violation of UN sanctions” on the North, in conjunction with its allies and partners.

U.S. Ambassador to the United Nations Nikki Haley acknowledged on Tuesday, addressing the Foundation for Defense of Democracies in Washington, that diplomacy with the North was going to be a “slow, tough process.”
“It’s possible,” said Haley, that North Korea is changing their mind on its commitment denuclearization, but added, “we’re not going to change our mind on sanctions.”

Washington has in recent weeks reverted back to its maximum pressure policy amid its deadlock in negotiations with Pyongyang, expanding its unilateral sanctions on the North and working on closing loopholes. Pompeo announced last week that he and the new State Department special representative for North Korea policy, Stephen Biegun, a longtime Ford executive, would make a trip to Pyongyang, presumably to find a break in the impasse in nuclear negotiations.

Three sources said the letter stated that the North felt the process couldn't move forward because the United States is still not ready to work toward signing a permanent peace treaty, as the Korean War ended in an armistice agreement. The Washington Post first reported on the secret letter delivered to Pompeo, who in turn showed it to the president.

Trump canceled the trip via Twitter, saying it could take place after Washington’s “trading relationship with China is resolved.” CNN reported, citing Sarah Huckabee Sanders, the White House press secretary, that Pompeo was in the room when Trump sent his tweet canceling the trip, which was to start later that day.

U.S. Ambassador to the Philippines Sung Kim, who has led diplomatic talks with the North leading up to the June 12 summit and afterwards, was spotted at the White House Friday as well.

Kim Eui-kyeom, the Blue House spokesman, told reporters in Seoul that the two countries have “not discussed” the resumption of joint military exercises, adding that “it is something to be discussed and decided between South Korea and the United States seeing the progress North Korea is making toward denuclearization.”

He added that there has been no request by the Pentagon for such discussions yet. But he also clarified that the suspension of major military exercises applied to this year, when asked if there had been agreement to postpone Key Resolve early year. It usually takes several months to prepare for major joint exercises.

The South Korean Ministry of Foreign Affairs likewise said through a statement on Wednesday that Mattis’s remarks “seems to be an extension of what has been agreed to already by South Korea and the United States on the suspensions of the joint drills, and there has been no other agreements made.”

It added that the two countries “share a firm recognition that the process toward the denuclearization and establishment of peace on the Korean Peninsula has to progress without wavering and plan to continue to close consultations to this end.”

When asked if the U.S. State Department will advise the resumption of the joint drills, Heather Nauert, its spokesperson, said in a briefing Tuesday that Trump, Pompeo and Mattis are closely coordinated and that “part of this is having conversations with the South Koreans and our allies as well.”