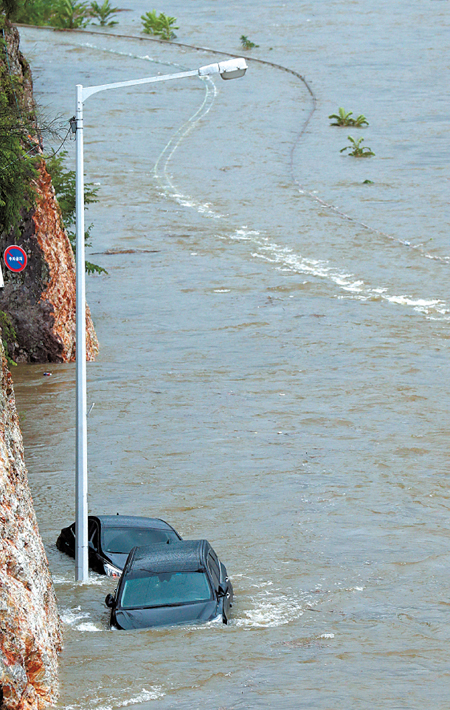 Two cars were inundated in Chuncheon, Gangwon, Tuesday afternoon after the Bukhan River swelled from heavy rainfall. Four people inside the vehicles were rescued by firefighters. [YONHAP]

The Korea Meteorological Administration (KMA) said Seoul and Gyeonggi were expected to see more rainfall from Wednesday night through early this morning, with other areas in the country experiencing lesser amounts.

The national weather authority said Korea was going through an “autumn monsoon,” though that precise term doesn’t exist in Korea’s meteorological lexicon, given that monsoons are supposed to occur only in the summer. Local weather experts said global warming was to blame for Korea’s changing climate.

A 49-year-old man, who was identified only by the surname Kim, drowned Tuesday night at around 8 p.m. after his car was inundated near the Wolleung Bridge in Nowon District, northern Seoul. The Ministry of Interior and Safety said it appeared he was unable to escape his vehicle as water welled up inside.

Two other people in the same area were rescued by firefighters and received treatment at a nearby hospital for minor injuries.

Four people in two cars in Chuncheon, Gangwon, were rescued by firefighters Tuesday afternoon after their vehicles were overtaken by rising waters coming from nearby Bukhan River.

At least 61 people in 41 households across the country had their homes flooded on Wednesday, including 31 people from 22 households in Eunpyeong District, northern Seoul. Some people in Gwacheon, Siheung and Hanam, all cities in Gyeonggi, sought evacuation to a nearby community center.

Across Seoul, Incheon, Gyeonggi and Daejeon, 764 houses and buildings were flooded and 109 places had walls or stonework damaged.

Nearly 380 hiking routes in 13 national parks were off limits, as were nine bridges and underground roadways in Seoul, Daejeon, Gyeonggi and Gangwon. Landslide warnings were issued in Pocheon, Gyeonggi, and other areas in the province as well as Incheon and Gangwon.

“Autumn monsoons generally tend to bring less rain than summer monsoons,” said Ho Chang-hoi, a professor of the School of Earth and Environmental Sciences at Seoul National University. “But in a lot of cases during autumn, a lot of rain pour down in a short period of time, which means damage can be greater than in the summer.

“The climate of the Korean Peninsula is changing to the point that the country can now experience heavy rain at any time from June to September,” Ho said.