In football, only Japan stands in Korea’s way

In football, only Japan stands in Korea’s way 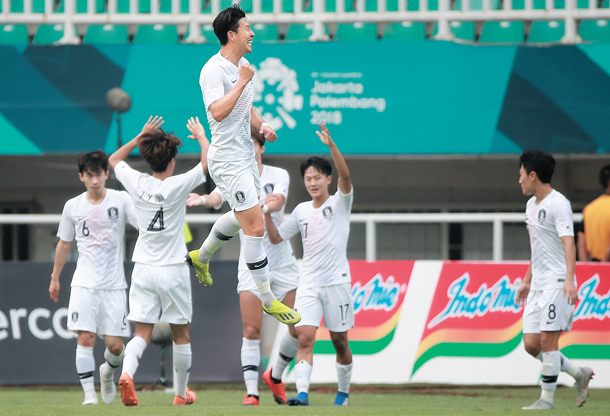 The Korean football team celebrates after scoring a goal during the semifinal match against Vietnam at Pakansari Stadium in Cibinong, Jakarta, on Wednesday. [YONHAP]

The U-23 Korean football team took a tough road to the finals but is now just one match away from defending their Asian Games title.

After defeating Vietnam 3-1 in the semifinals at Pakansari Stadium in Indonesia, Korea will now face Japan in the final tomorrow.

Korea got off to a quick start against Vietnam with Lee Seung-woo scoring the first goal only six minutes into the match. Hwang Ui-jo, the leading scorer at the Asian Games, doubled Korea’s lead in the 27th minute.

Only nine minutes into the second half, Lee scored another to extend Korea’s lead to 3-0.

Vietnam, led by Korean coach Park Hang-seo, finally scored its first goal in the 69th minute but was unable to level the playing field.

Shortly after Korea’s match, Japan defeated the United Arab Emirates 1-0 to earn their spot in the final.

In addition to football having one of the biggest fan bases among Asian Games sports, the final is likely to receive a lot of attention as it pits Korea against Japan.

The sporting rivalry between the two countries has only intensified over the last two weeks as Japan has supplanted Korea to take second place in the medal count for the first time in decades.

The two teams often face off at international events. At the 2012 London Olympics, Korea’s under-23 team defeated Japan 2-0 to win bronze, but at the 2016 AFC U-23 Championship, Japan came from behind to take a 3-2 win.

Going into this match, Korea looks like the favorite. As the Japanese football team has been heavily focused on preparing for the 2020 Tokyo Olympics, the squad at the Asian Games does not include a single wild card player and is entirely made up of footballers under 21 years of age.

Korea, meanwhile, pulled out all the stops. Its squad includes big names like Lee, Son Heung-min, Hwang Hee-chan and Kim Min-jae, who competed at the recent World Cup in Russia.

“Son is our players’ mentor and he is very important for this team,” Kim said. “Whether it’s center or wings, Son can play anywhere. He is a player we can rely on and can use anywhere.”

Football fans from around the world will be paying especially close attention to the final as the stakes are not only high for Korea, but also for the English Premier League. Gold at the Asians Games means a military exemption for Korean men, and for Tottenham Hotspur star Son, this is the very last chance.

“Our players went through such a difficult, tough road to reach the final, and honestly, they’re all exhausted,” Kim said. “But we managed to keep ourselves strong mentality. We will stay focused until the final moment.”

Korea will play its gold medal match against Japan at 8:30 p.m., Korea time, at Pakansari Stadium in Cibinong, Jakarta, tomorrow.