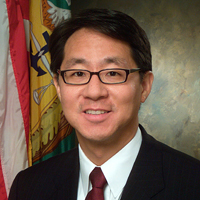 Curtis S. Chin
The author, a former U.S. ambassador to the Asian Development Bank, is managing director of advisory firm RiverPeak Group, LLC. Follow him on Twitter at @CurtisSChin.

BANGKOK — In July, Korea’s financial regulator — the Financial Services Commission (FSC) — took an important step forward with a major organizational reshuffle intended “to better protect financial consumers and proactively respond to financial innovation in the fourth industrial revolution era.” Beyond the rhetoric, this could well be an important step forward in the nation’s embrace of the disruptions — for good and for bad — that financial innovations can bring, including digital currencies.

The restructuring included the creation of a Financial Consumer Bureau and a Financial Innovation Bureau tasked with policy initiatives for financial innovation, including innovative financial services using fintech or big data and, in the words of the FSC, “responses to new developments and challenges such as cryptocurrencies.”

Those challenges are front and center elsewhere in the Asia-Pacific region. This time, Southeast Asia’s second-biggest nation as measured by GDP, Thailand, unfortunately plays a starring role in the latest cryptocurrency-scandal. The daily media headlines covering this latest bitcoin scandal read as if from a television drama.

Indeed a local actor nicknamed “Boom” is now part of the mix. As this story unfolds and government regulators respond, it will be important that the further development and application of financial innovations not be unintentionally undercut.

According to local media reports, an investor in the Stock Exchange of Thailand and staff at up to three Thai banks may well have been complicit in a $24 million scandal involving a businessman from Finland, a Macau casino and a cryptocurrency called Dragon Coin.

Described by media as an early investor in bitcoin who made millions from his ventures, the Finnish national Aarni Otava Saarimaa is said to have lost more than 5,500 bitcoins in a well-orchestrated scam. The cryptomillionaire has told Thailand investigators that he was duped into sending bitcoin to Thai nationals for reinvestment, to include purchase of Dragon Coin, a cryptocurrency that would be used at a casino in Macau — a special administrative region of China.

And somewhere along the way, funds generated by the sale of Saarimaa’s bitcoins ended up in multiple bank accounts, including one reported to belong to a local Thai actor, Jiratpisit Jaravijit, who was arrested while filming in Bangkok.

Police have reportedly also said that several employees of Thai banks failed to report money transfers of 2 million Thai baht ($61,000) in a violation of financial industry rules that require reporting of such transfers to the country’s Anti-Money Laundering Office.

With stories like this, some may well question the pace of technological innovation poised to further disrupt Asia’s financial services industry, whether in Korea or here in Thailand. China has already intervened and acted against virtual currencies, with plans ultimately to create its own. Still, large parts of Southeast Asia, and Thailand in particular, have benefited from and remain well-positioned to capitalize on financial technology, or fintech, developments.

This should continue. Indeed, recognizing fintech’s potential to drive even greater access to capital and financial inclusion, The Bank of Thailand has taken a leading role in creating an enabling environment for fintech expansion in that nation.

Lessons from that central bank and others in the region, including the Monetary Authority of Singapore and the work of regulators in Korea, can provide important input to policymakers across the region seeking to think through how best, if at all, to encourage and regulate financial innovations.

Here are eight broad directions for consideration, based on a day-long roundtable co-hosted by the Bank of Thailand and the Milken Institute, the non-profit, non-partisan economic think tank where I serve as the inaugural “Asia Fellow.”

These recommendations were drawn from a recently released white paper, “Framing the Issues: The Future of Finance in Thailand,” co-authored by colleagues John Schellhase and Staci Warden of the Milken Institute Center for Financial Markets. That report, available online, discusses how policymakers can best achieve their mandate while working to encourage innovation.

• First, evaluate current processes for regulatory reforms to determine whether they are adequately responsive to the pace of technological change.

• Fourth, engage in ongoing consultations with both private-sector incumbents and new entrants.

• Sixth, assess the opportunity — and the proper parameters — for the adoption of open-banking solutions for bank-fintech collaboration.

• Seventh, take a strategic approach to the cross-border nature of many financial technologies.

• Eighth, establish standards for how businesses — both in the financial services industry and in other sectors — collect, store, and share the online data generated by individuals.

At our Bank of Thailand-Milken Institute roundtable and in other forums, Dr. Veerathai Santiprabhob, the governor of the Bank of Thailand, has laid out three imperatives to guide fintech policymaking and private sector innovation: productivity, inclusivity and resilience. All three are vitally important.

At the same time, the governor made clear that financial services cannot innovate at the expense of financial stability.
That critical challenge of achieving a balance of innovation and stability is on display increasingly across Southeast Asia and all of Asia and the Pacific, as government leaders and policymakers in the financial industry and other sectors seek to navigate a world in transition amidst rising trade tensions, increasing concerns over cybersecurity and growing inequality.

Financial technology innovations that could well benefit the “unbanked” and others who would benefit from greater access to capital could well be stymied by well-intended regulations. Avoiding this will be all the more important as investigators and regulators, whether in Thailand or Korea and elsewhere, continue to decipher and ultimately respond to the latest cryptocurrency challenge and opportunity.