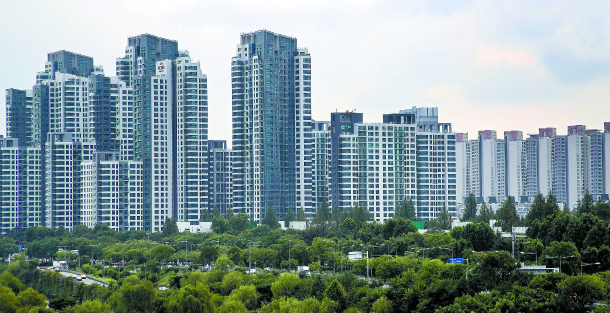 The Blue House, government and ruling Democratic Party have agreed on the need to cool off the real estate market, which recently became stimulated by Seoul Mayor Park Won-soon’s announcement of major development projects in Yeouido, western Seoul, and Yongsan, in central Seoul - which he backtracked on later.

Lee Hae-chan, in his first meeting with senior officials from the Blue House and government since being elected leader of the Democratic Party, suggested raising the comprehensive real estate tax.

“The government should strongly consider strengthening the comprehensive real estate tax on people who own more than three apartments or high-priced apartments,” Lee said Thursday. “When I was the prime minister in 2005, a similar situation occurred and we [the Roh Moo-hyun administration] came up with numerous measures.”

“If there are suspicions of speculative investments,” he warned, “necessary actions have to be taken immediately.”

Lee said the government needs a policy that would redirect money going into real estate speculation into more productive investments.

“The government will further strengthen means to shut out speculative demand while protecting actual demand [from people who purchase apartments to live in],” Jang said.

The government has been trying to cool the real estate market for months.

On Sunday, the Land Ministry and the Finance Ministry added four districts in Seoul to a list of neighborhoods where speculative forces were at work: Dongjak, southern Seoul, Dongdaemun, eastern Seoul, Jongno and Jung District in central Seoul. Once on that list, a number of restrictions are applied including increases in income taxes when selling an apartment, a ban on sales of apartments being redeveloped, a higher loan-to-income ratio to get a mortgage and limiting mortgages to one per household.

Currently there are 11 districts in Seoul on the list, including the four affluent districts in Gangnam, southern Seoul - Gangnam, Seocho, Songpa and Gangdong - as well as Yongsan and Yeongdeungpo, in western Seoul, where Yeouido is located.

The Korea Housing Finance Corporation on Wednesday raised the possibility of limiting loans for jeonse, or long-term rent deposits, for households whose combined income exceeds 70 million won ($63,000) or those that owns multiple apartments as early as next month.

To get a jeonse loan, the borrower needs to get a guarantee from the Korea Housing Finance Corporation.

Recently jeonse loans have increased sharply. As of the end of July, the amount of outstanding jeonse loans borrowed from the five commercial banks - KB Kookmin, Shinhan, KEB Hana, Woori and NH Nonghyup - was estimated to be 56 trillion won, a 43.6 percent increase compared to 17 trillion won a year earlier.

The financial authority believes that people who own multiple residences, who have been restricted from taking out mortgages to buy property since the Moon government’s real estate regulations were announced last August, have been taking out jeonse loans to get apartments. Jeonse loans are easier to get than mortgages.

Additionally, the government is looking into people who borrowed money by registering as a lease business, which would evade restrictions on mortgage lending to individuals.

The maximum limit loan-to-value ratio on a mortgage is 30 percent for apartments located in the areas labeled as prone to speculation, while a lease business can borrow up to 80 percent of the real estate price.

If the government decides to disqualify households that earn more than 70 million from getting jeonse loans, there will be two exceptions: newlywed couples or families with more than two children.

The National Tax Service joined in by announcing it’s investigating 360 people suspected of using illegal means to buy expensive apartments, including a 20-year-old person who bought a 3.3 billion won apartment despite having an annual income of 50 million won as well as a father who bought an apartment for one of his children by withdrawing money from an ATM to evade inheritance tax.

According to KB Kookmin Bank, Seoul apartment prices have risen 5.6 percent as of the end of July compared to the end of last year, which is a sharp contrast to the 0.07 percent rise in Korea’s six major cities, which excludes Seoul.

A recent study by the Korea Appraisal Board shows the sharp uptick of apartment prices in Seoul.

Apartment prices in Seoul, particularly in Yeouido and Yongsan, have been spiking ever since Seoul Mayor Park Won-soon announced a major development plan.

The government stepped in to cool down the market, hinting at raising the government-assessed value, which is used in taxing property, and the comprehensive real estate tax, but the market showed little signs of easing.

Finally Mayor Park, who argued that Seoul’s development plan is no business of the central government, gave in and unexpectedly suspended the projects on Sunday.

Meanwhile, the Korea Association of Realtors members gathered in front of the Ministry of Land, Infrastructure and Transport office in Sejong demanding that the government change its real estate policy and halt the recent crackdown on real estate agencies in Gangnam, which is making worse their already dire situation.

They demanded that, instead of hassling innocent real estate agencies, the government should focus more on catching unlicensed real estate brokers.