Send in the chaebol

Send in the chaebol

CHOI JOON-HO
The author is the head of science and future team of the JoongAng Ilbo. 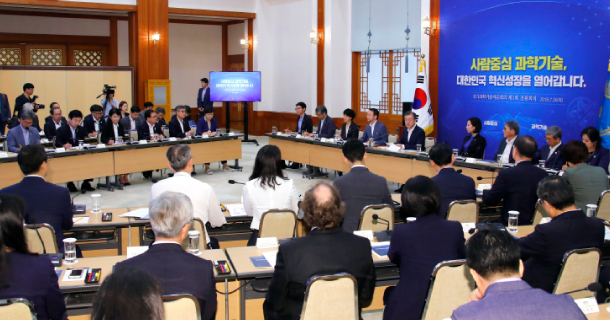 President Moon Jae-in on July 26 presides over the first meeting of the Presidential Advisory Council on Science and Technology at the Blue House. [YONHAP]

The Ministry of Science and ICT is in a dilemma over some rather happy news. The research and development budget for 2019 will exceed 20 trillion won ($18 billion) for the first time. While the ministry would love to publicize the good news, it is concerned about public opinion. So it announced the budget only after the Ministry of Economy and Finance announced the overall figure.

The hesitation is understandable. State R&D has been a controversial issue in the past. It was criticized for failing to come up with one good growth engine despite a world-class GDP. So the budget may be met with a lukewarm response.

But it is certainly welcoming that the government R&D budget was increased by 3.7 percent from last year, now exceeding 20 trillion won for the first time. What matters now is how the money is spent.

State-level science and technology development strategies should be established and specific action plans need to be drafted. Until now, there have been countless growth strategies but not one good growth engine. It means that the strategies and action plans have not been right.

But who is on this important council? Most members are professors and researchers at state-funded research institutes. Some are in the private sector, but mostly with small and medium-sized businesses. Executives at major corporations such as Samsung, Hyundai and LG, which actually lead the national economy, are nowhere to be seen. The members serve for a year, so it is hard to believe that they are not simply rubber-stamping policies made by bureaucrats.

How about in other developed countries? Germany’s Industry 4.0, which started the manufacturing revolution, was initiated by the private sector. CTOs of major German companies, such as Siemens and BMW, were involved. Japan also has a group similar to Korea’s Presidential Council and includes executives from companies like Toyota and Mitsubishi.

The 20 trillion won state R&D budget failed to create a single growth engine and sleeps in the drawers of research institutes because of the tangled science and technology system in Korea.

I propose that the Presidential Advisory Council on Science and Technology bring some CTOs from major conglomerates on board.