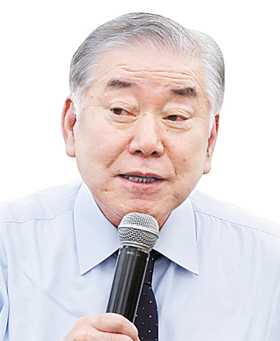 Well before the detente between North Korea and the United States, South Korea proposed a four-step process last November that prioritized improving relations among the three countries over the North’s denuclearization, a proposal to which Washington and Pyongyang responded positively, a senior adviser to South Korean President Moon Jae-in exclusively told the JoongAng Ilbo on Wednesday.

The remarks from Moon Chung-in, the Blue House’s special adviser for diplomacy and national security, falls in line with Pyongyang’s current insistence to build diplomatic ties with Washington before the regime gives up its nuclear weapons. The United States, on the other hand, wants the North to denuclearize first.

Moon Chung-in did not explain to what extent Washington agreed to President Moon’s peace vision when Seoul raised the issue last November, nor did he explain what made the United States apparently flip-flop, leading to the current deadlock in denuclearization talks.

But in analyzing the growing rift between North Korea and the United States, the adviser said the reason why they were not making any progress was because U.S. President Donald Trump and North Korean leader Kim Jong-un failed to agree on a timeline for four major agreements that they signed on June 12 during their first summit and in what order they should be carried out.

Pyongyang claims the agreement should be carried out in that order, while Washington has refused to lift sanctions on the regime unless it carries out what it has called “final, fully verified denuclearization.”

According to Moon Chung-in, President Moon’s four-point peace plan which the South Korean government relayed to North Korea and the United States last November were as follows:

First, the leaders of countries with an interest in formally ending the 1950-53 Korean War would gather to make a symbolic announcement. (The war technically ended with an armistice rather than a peace treaty, leaving the Korean Peninsula in a formal state of war.)

Third, all sides would agree to keep key measures of the armistice agreement, such as the United Nations Command and demilitarized zone, intact before a peace regime is established on the Korean Peninsula.

Finally, North Korea and the United States would establish diplomatic ties and sign a peace treaty after the North completely achieves denuclearization.

In the interview, Moon Chung-in stressed that the third step meant U.S. troops stationed in South Korea would remain on the peninsula until North Korea completely denuclearizes, while some North Korea analysts have said that Pyongyang would want troops out at the first step.