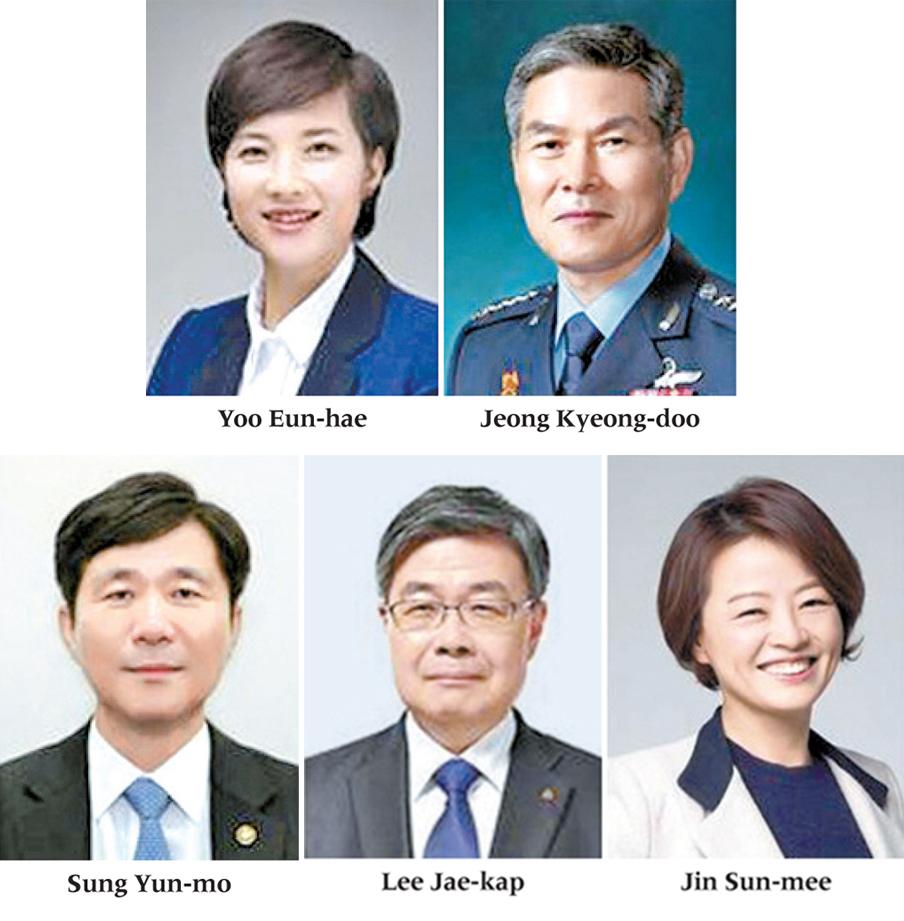 The Blue House carried out its first major cabinet reshuffle on Thursday since taking power 15 months ago, changing the heads of five ministries.

They are the Education Ministry; Defense Ministry; Trade, Energy and Industry Ministry; Employment and Labor Ministry; and Gender Equality and Family Ministry.

Making her political debut in the 2012 general election, Yoo served as a spokesperson for the party and for Moon’s presidential campaign.

Kim Eui-kyeom, the Blue House spokesman, said Yoo had a deep understanding of the role of the Education Ministry and how it functions from her experience as a parliamentary education committee member.

“She is the right person to carry out educational reform to make a public school system that is future-oriented while actively addressing a variety of issues facing the education sector caused by the decreasing number of students,” said Kim.

Jeong Kyeong-doo, the current chairman of the Joint Chiefs of Staff who hails from the Air Force, will replace outgoing Defense Minister Song Young-moo, whose leadership has been in question since he engaged in a verbal brawl with a military subordinate at a parliamentary hearing in July.

By naming a defense chief who is not from the Army two times in a row, Moon made clear his commitment to reforming the military, which has been largely led by graduates of the Korean Military Academy (KMA), who serve in the Army. Like Jeong, Minister Song is not a graduate of the KMA but of the Naval Academy.

“The appointee has an in-depth knowledge and experience in defense and military policy,” Kim said. “He is a man of principle who always makes sure he finishes a job he started while being open to adopting change when necessary.”

For the Ministry of Trade, Industry and Energy, Moon named Sung Yun-mo, a career bureaucrat who currently leads the Korean Intellectual Property Office. Sung will replace Paik Un-gyu, a former professor of energy engineering who has been a strong advocate for Moon’s phasing out of nuclear energy.

Lee is a veteran official with more than 30 years of public service in employment and labor areas, the presidential office said. He previously served as a vice minister of the ministry.

Moon’s appointment of a new employment and labor minister comes amid growing concerns over the direction of the country’s economy, especially with regard to employment.

Data by Statistics Korea released last Friday indicated that only 5,000 new jobs were added to the Korean economy in July, plummeting from 106,000 new hires in June, which was already considered an alarmingly low number.

The data also showed that over 200,000 temporary and day-to-day jobs vanished last month.

A senior presidential official said outgoing Minister Kim first floated the idea of leaving the ministry, telling the Blue House she thought it was time for her to go after a year in the position.

Asked if the change of employment minister hinted at a change of labor policy, in particular Moon’s controversial minimum wage hikes, a senior presidential official dismissed such speculation, saying the appointment was “not related to a shift in labor policy.

“I understand that Lee was appointed because of his ability to deal with a variety of issues drawing lessons from his years in the Labor Ministry,” the official said.

Two-term Rep. Jin Sun-mee of the DP, a former lawyer, was tapped to take charge of the Gender Equality and Family Ministry.

With the new line up, there will be five female ministers in the 18-person cabinet, 27.7 percent of all ministers.

During his campaign, Moon promised a cabinet with at least 30 percent women.

Minister appointees will face parliamentary hearings. But parliamentary approval is not required for Moon to confirm their appointments.

For vice ministerial appointments, Moon named Wang Jung-hong, current secretary general of the Board of Audit and Inspection, as head of the Defense Acquisition Program Administration. Chung Jae-suk, a veteran journalist from the JoongAng Ilbo, was named head of the Cultural Heritage Administration.

Yang Hyang-ja, a former executive at Samsung Electronics, was named to lead the Central Officials Training Institute while Rhee Suk-soo, a lawyer, was named head of the Office of Planning and Coordination at the National Intelligence Service.

The reshuffle was intended to “make the public feel the impact of policies that have been implemented” over the past year, Kim Eui-kyeom of the Blue House stressed.

The cabinet shake-up came as Moon’s approval rating has been steadily declining over the past two months. In mid-June, his popularity soared just short of 80 percent on the back of high expectations for a breakthrough in inter-Korean and the North-U.S. relations. It has been falling ever since to the mid-50 percent range, hurt by an impasse in the North Korean denuclearization process and a worrying downward trend in employment.