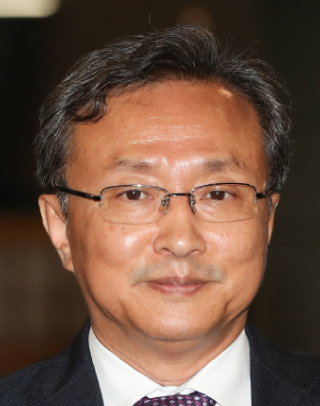 President Moon Jae-in has nominated a liberal judge to be chief justice of the country’s top court, the Blue House said on Wednesday. The pick is expected to engender yet another row in the National Assembly over the ideological balance of the judiciary.

Moon has tapped Yoo Nam-seok, currently a justice in the Constitutional Court, to lead its nine-member bench after Lee Jin-sung steps down from the role on Sept. 19. Yoo joined the bench last October after Moon nominated him.

The president, legislature and Supreme Court chief justice each appoints three people to the Constitutional Court’s nine-member bench. The president has the sole right to name the chief justice from among them, and the National Assembly has to approve the pick.

Kim was tapped by Moon in August 2017 and underwent a harrowing confirmation hearing in the legislature, where the conservative opposition attacked him for his liberal views, including his defense of gay rights. His appointment was confirmed after a majority vote with no support from the Liberty Korea Party, the main conservative opposition.

The Society for Research on Our Law was started in 1989 by judges who opposed the conservative Roh Tae-woo administration’s attempt to retain a right-leaning Supreme Court chief justice appointed by his authoritarian predecessor, Chun Doo Hwan, even after direct presidential elections were restored in June 1987. The group has supported judicial reform and exercised significant influence during the liberal Roh Moo-hyun government from 2002 to 2007.

Like Kim, Yoo was accused of partisanship by the Liberty Korea Party and center-right Bareunmirae Party during his confirmation hearing to fill the last vacancy in the Constitutional Court last October, based on his background in the law society and opposition to punishment for conscientious objectors to military conscription.

The National Assembly’s Legislation and Judiciary Committee eventually accepted his appointment, though legislative approval was not required for his appointment to the bench.

This time, however, the National Assembly’s approval is necessary for his promotion to chief justice, and the conservative opposition’s concerns will likely re-emerge at the confirmation hearing.

Opposition parties successfully blocked Moon’s first pick for Constitutional Court chief justice in May last year, when they delayed a vote to confirm acting Chief Justice Kim Yi-su for over 100 days. When the matter finally reached the floor, Kim failed to receive a majority vote, and Moon instead tapped Lee, who by then had less than 10 months left in his term on the bench.

But the power balance in the National Assembly has since improved in favor of the ruling Democratic Party after it picked up 11 new seats in by-elections on June 13. With the support of the left-leaning Justice Party and Party for Democracy and Peace, the liberal wing of the National Assembly holds a total of 156 seats, exceeding the majority needed for confirmation.

The Democratic Party on Wednesday also nominated Kim Ki-young, a judge in the Seoul Eastern District Court, as the legislature’s candidate for a vacancy in the Constitutional Court.

Kim Ki-young is also a member of the Society for Research on International Human Rights Law and is known to be close to Supreme Court Chief Justice Kim Myeong-su.